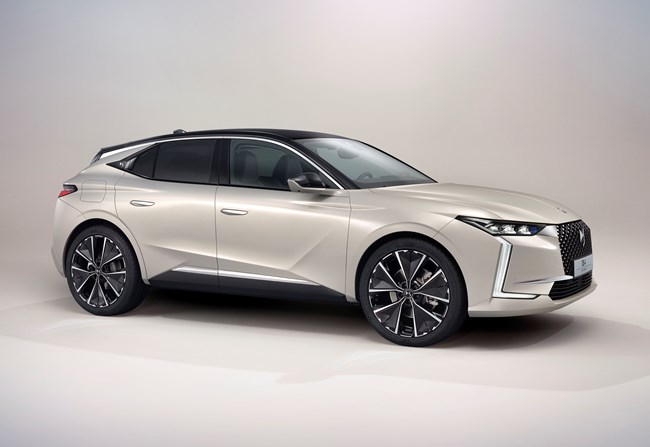 The new DS 4 lower-medium car has been unveiled.

The model will become the fourth in the DS range, joining the DS 3 Crossback and DS 7 Crossback SUVs, and the upcoming DS 9 executive saloon.

The DS 4 will be available with petrol, diesel, and plug-in hybrid powertrains. The latter, badged the E-Tense, will feature a 180hp petrol engine and a 110hp electric motor, with a combined 225hp maximum output - DS says it will have a pure electric range of more than 30 miles on the WLTP cycle.

Three petrol engine options will be offered, producing 130hp, 180hp, and 225hp, as well as a 130hp diesel. Eight-speed automatic transmission will be standard across the range.

Three derivatives will be on offer. As well as the standard DS 4, there will also be a Cross model with crossover styling features, including lower bumper protection and roof bars, and the addition of advanced traction control and hill descent control designed for rough terrain. In contrast, the DS 4 Performance Line is designed to have a sportier appearance, including black exterior detailing with black alloy wheels.

Inside, a 10in screen features the Iris infotainment system, which DS claims is designed with the usability of a smartphone, with customised, personalised profiles, and featuring gesture and voice control. Gesture control is performed via a 5in 'Smart Touch' touchscreen on the centre console.

The model also features an extended head-up display, giving the illusion of projecting information onto the road in front of the car, such as its speed, information on driver aids, sat-nav instructions and warning messages.

The DS 4 gets the brand's active scan suspension, which deploys a camera that scans the road in front of the vehicle, looking out for road surface irregularities, and automatically softens or stiffens the car's suspension to compensate.

Another feature previously seen on other DSs is the night vision system, which provides the driver with an infrared camera display, allowing them to spot upcoming hazards up to 200 metres away when light conditions are poor.

As well as DS's existing driver assistance package, including adaptive cruise control and lane assist, the DS 4 has three capabilities which are new to the brand: semi-automatic overtaking, speed adjustment for corners. and anticipated speed recommendations from signposts.

The DS 4 will be available in the UK from November. Prices are yet to be announced.