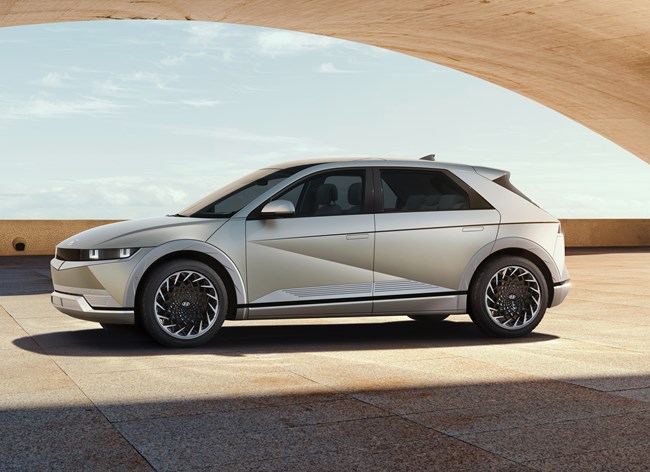 The first model from Hyundai's new Ioniq electric sub-brand, the Ioniq 5 comes with a choice of two battery pack options - 58kWh or 72.6kWh - and two electric motor layouts, with either a rear motor only or with both front and rear motors, the latter arrangement providing all-wheel drive.

With the bigger battery, total power outputs of 301hp or 214hp are available, while the version with the smaller battery comes with either 232hp or 167hp.

Hyundai says a two-wheel drive version with the bigger battery will have a range of up to 298 miles on the WLTP cycle.

The Ioniq 5 is compatible with ultra-fast charging, meaning a 10-80% charge can be completed in 18 minutes with a compatible 350kW charger.

A V2L function will allow the car to act as a charger for electric devices, such as e-bikes, scooters, and camping equipment.

The car's interior features a 12in infotainment touchscreen and a 12in digital instrument display, along with an augmented reality head-up display, and a moveable centre console, which can slide back by up to 140mm.

The Ioniq 5 will arrive in the UK by mid-2021. A limited edition Project 45 model is available to reserve now, priced at £45,000 including the UK Government's plug-in car grant. Other prices will be announced closer to the launch date.