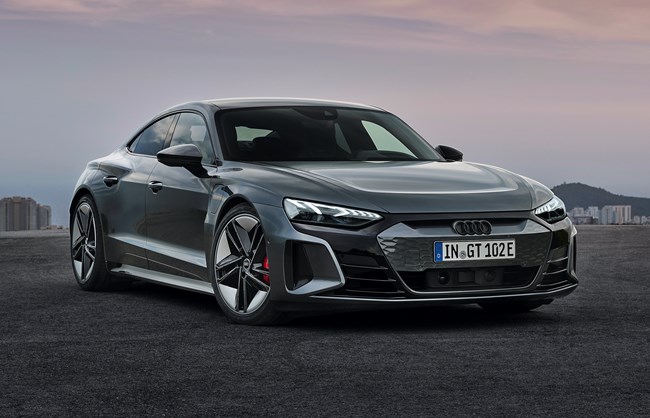 With a combined output of 469hp the E-Tron GT Quattro achieves 0-62mph in 4.1sec and a top speed of 152mph. In boost mode the car's output is increased to 523hp for 2.5sec when using launch control.

Audi's 800V battery power system can store 86kWh (93 kWh overall) in both models which allows for a higher continuous output and a faster charging time.

As standard the E-Tron GT can charge with up to 11 kW , meaning an empty battery can be fully charged overnight.

An optional onboard charger which increases charging capability to up to 22 kW will be available later in the year.

In terms of range it is predicted that the E-Tron GT will achieve 295 miles and the RS model 280 miles.

The rear motor is driven through a two-speed transmission with a short ratio first gear that allows for greater acceleration when launch control is engaged.

The fully electric gran turismo has a longer ratio second gear which is more efficient and provides larger amounts of reserve power.

Audi's new flagship EV adopts a sleek design at 1.41 metres high with a width of 1.96 metres and length of 4.99 metres that stretches over a 2.90-metre wheelbase.

This results in a low drag coefficient of 0.24 which helps with efficiency and driving range.

The lithium-ion battery system in the GT and RS models sits between both axles at the lowest point resulting in a near 50:50 weight distribution.

A number of driver assistance systems will be available as standard or optionally available on the E-Tron GT and RS E-Tron GT.

Audi has also developed a 'unique soundscape' for their flagship EV which is amplified to both the interior and exterior of the car. This comes as standard on the RS model put is optional on the E-Tron GT Quattro.

As a fully electric vehicle, the E-Tron GT will fall into the 1% BIK tax band from April, rising to 2% next year.