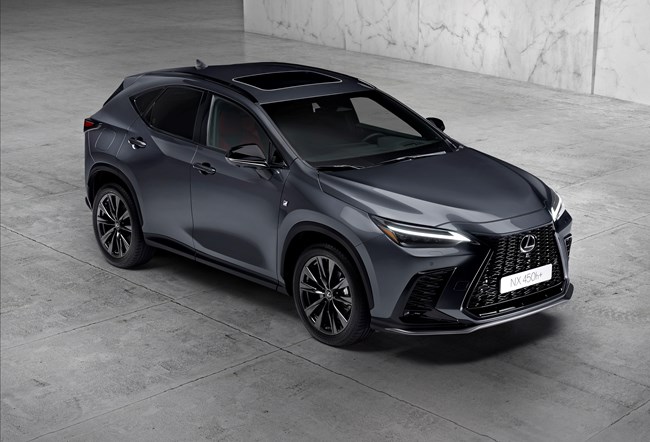 Lexus has unveiled the new, second-generation version of its NX SUV, which will be its first-ever car to be offered with a plug-in hybrid powertrain.

The PHEV pairs a 2.5-litre petrol engine with two electric motors, one on each axle, for a combined output of 306hp. An 18.1kWh battery will allow a pure electric driving range of up to 39 miles, while CO2 emissions of less than 40g/km are expected on the WLTP cycle.

One other engine option will be available in the UK, a 242hp conventional hybrid. Lexus says this is 22% more powerful than the outgoing model's powertrain, while also offering a 10% reduction in CO2 emissions.

The new NX marks the introduction of a new Lexus infotainment platform, designed to be more powerful, responsive and intuitive, with a wider range of functions. A touchscreen measures up to 14in, but physical controls are retained for frequently used controls like audio volume and air conditioning.

The Lexus Link smartphone app allows the driver to remotely control functions such as locking and unlocking doors, and heating or cooling cabin before a journey.

The new NX will be the first Lexus to be fitted with an e-latch electronic door release system, operated via a push-button switch rather than a traditional door handle. This is paired with blind spot monitoring technology, allowing it to detect traffic or cyclists approaching from the rear, and prevent the door opening if there is a collision risk. Lexus claims this will help prevent 95% of door opening collisions.

The new NX will also be the first Lexus with the third-generation version of the brand's Safety System + package, which will be fitted as standard. This features an improved pre-collision system that can detect motorcycles and objects such as trees and telegraph poles in the car's path, as well as the addition of emergency steering assist functionality, improved adaptive cruise control and lane trace assist systems, and an expanded road sign assist feature which is now capable of recognising more signs.

Prices for the new NX are expected to be announced at the end of this summer, ahead of the model's arrival in Europe in the fourth quarter of 2021.