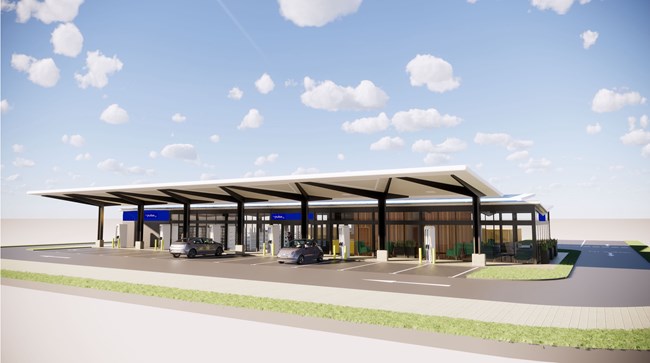 A new network of ultra-fast EV charging hubs is to be introduced by BP Pulse.

The firm says the new hubs, developed in partnership with The EV Network (EVN), will be installed at high-traffic locations across the UK, including alongside motorways.

BP Pulse says it is not able to confirm how many of the new hubs will open, but that it will be a 'significant number'.

Different sizes of hub will be included in the network, but the largest will feature 24 chargers alongside convenience facilities including food and drink, toilets, and a lounge area.

BP Pulse CEO Matteo de Renzi said: "We are building a charging network that will give consumers the confidence to make the switch to EVs, knowing they can get the charge they need in the right places.

"We're taking another step forward in our commitment to make ultra-fast charging widely accessible across the UK, including in easy reach of the motorway network.

"These new hubs will complement BP Pulse's existing plans to expand the number of ultra-fast chargers on BP's forecourts and it's exciting to be launching this new additional option for drivers."

EVN co-founder and CEO Reza Shaybani said: "This ground-breaking agreement with BP Pulse has got 2021 off to a racing start. As the largest public charge point operator in the market, BP Pulse is a perfect partner for EVN to deliver critically required EV charging infrastructure nationwide.

"Together we will be fuelling growth in a vital part of the UK's green economy, making a reliable national network of EV charging stations a reality for fast-growing numbers of EV drivers."