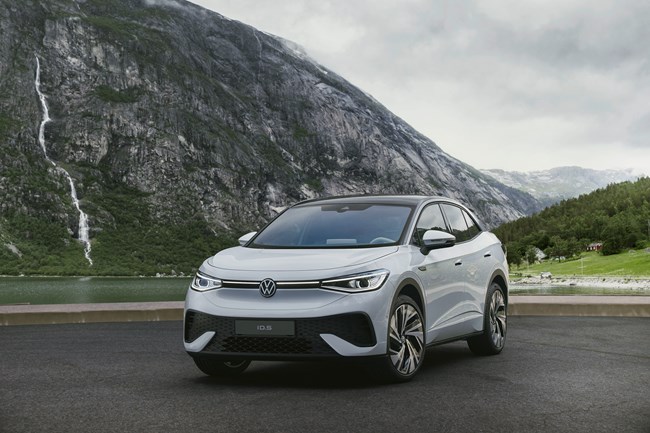 Volkswagen has unveiled the ID.5, a new electric SUV-coupe.

It is the third model in VW's ID electric range, following on from the ID.3 and ID.4.

The ID.5 is set to be offered in two forms - a regular model, with a rear-mounted electric motor, and the ID5 GTX, which will feature two motors, one at each axle, to provide all-wheel drive.

VW says all versions will be equipped with a "large, long-range" battery, although technical details of this and the motor outputs are yet to be confirmed. The firm has however said that charging at a rate of up to 135kW will be possible.

Efficiency is said to be helped by a drag-coefficient of 0.26, helped by design features such as an integrated rear spoiler and front air vents which only open when necessary.

The ID.5 is 4,599mm long, with a 2,766mm wheelbase, and despite its coupe roofline offers rear headroom only 12mm down on the conventional SUV ID.4, according to VW. Luggage capacity with the ID.5 is 549 litres.

The ID.5 will also feature Car2X communication, taking signals from other VW vehicles and infrastructure within 800 metres to generate warnings about dangerous conditions, accidents, and stationary traffic, communicated to the driver via visual warnings.

The ID.5 will go on sale next year. Prices and full specs are yet to be announced.