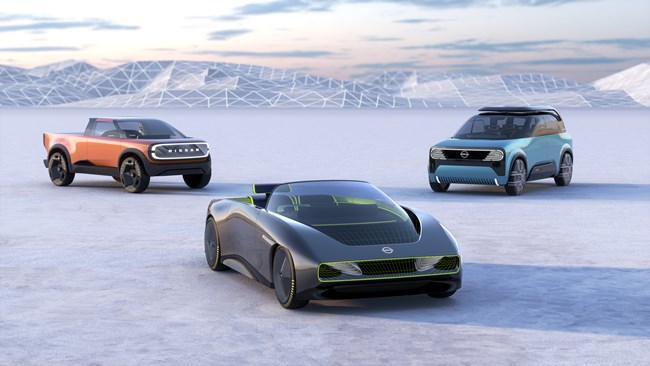 Nissan has announced plans to launch 23 new electrified models, including 15 pure EVs, by 2030.

The company has made the commitment as part of its newly-unveiled Ambition 2030 strategy.

It said it would aim for an electrification mix of more than 50% globally across its Nissan and Infiniti brands by that date, including more than 75% of European sales by 2026.

Other elements of the plan include an investment of two trillion Japanese yen in new technology over the next five years, and the launch of an EV with all-solid-state batteries by 2028, with the latter technology set to reduce charging times by two-thirds according to the manufacturer.

Nissan is also aiming to roll out its ProPilot assisted driving system to more than 2.5 million vehicles by 2026, with next-generation LIDAR systems set to be on almost all new models by 2030.

The company has also unveiled three new concept cars said to give an idea of where its technology could lead its products in the future.

"We want to transform Nissan to become a sustainable company that is truly needed by customers and society."