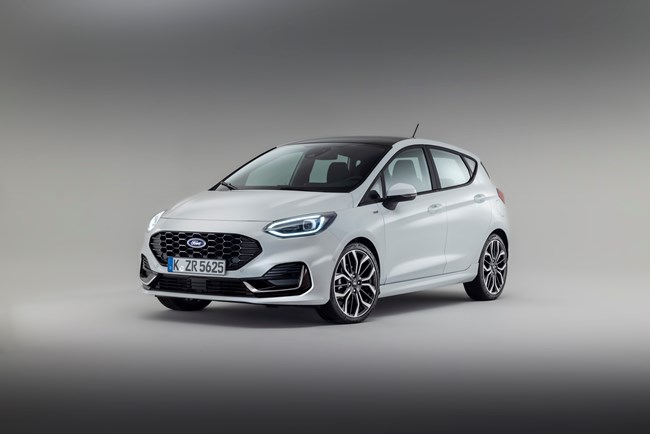 Ford has unveiled the newly facelifted version of its Fiesta small car.

Exterior styling changes include a new bonnet design that raises the height of the nose, with larger upper grilles, and the Ford badge now inside the grille rather than on the bonnet lip.

LED headlights are standard for the first time throughout the Fiesta range, with matrix LED technology also available.

Black surrounds have been added to the rear lights, and seven new alloy wheel designs are available, along with two new exterior paint colours - Boundless Blue and Beautiful Berry.

Inside, a 12.3in digital instrument cluster is newly available, while a new wrong-way alert system will warn the driver should they drive through two 'no entry' signs on a motorway ramp.

Engine options are a 100hp petrol, and 125hp and 155hp petrol mild hybrids. The latter engines use a 48V system that can assist the engine when accelerating, and can switch it off when coasting to a stop below 15mph to save fuel.

Ford has quoted WLTP fuel economy and CO2 emissions figures of from 48mpg and 111g/km for the 125hp engine with a six-speed manual gearbox, and 45.2mpg and 117g/km with a seven-speed, dual clutch automatic.

Four equipment grades are available - Trend, Titanium, ST-Line, and Active. All but Trend can be further augmented with luxury Vignale packs.

The Fiesta ST hot hatch has also been facelifted and continues as part of the line-up.

The updated Fiesta is available to order now, with prices starting at £16,620. The first deliveries are expected early next year.