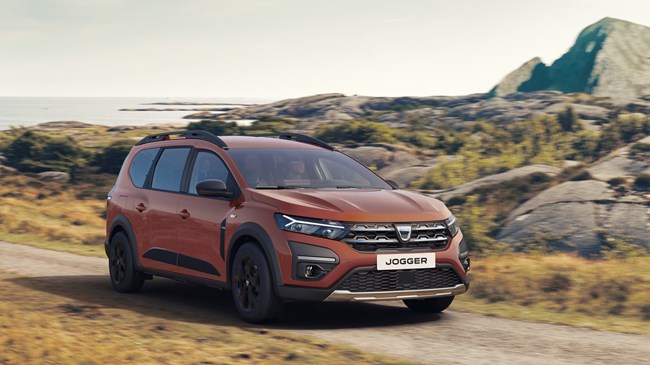 Dacia has unveiled the Jogger, a new model it says combines the spaciousness of an MPV with SUV styling.

The Jogger, which is a seven-seater model, is based on the same platform as the Sandero supermini, but extended to over 4.5m in length, and with 200mm of ground clearance to help with rough terrain.

Dacia claims the model's three rows of seating can accommodate seven adults in comfort, while boot capacity ranges from 213 litres with all the seats in place, to 1,819 litres with the second-row seats folded and the third row removed.

There will be a choice of two engine options at launch, a 110hp petrol, and a 100hp Bi-Fuel, able to run on petrol or LPG.

Dacia says the range will subsequently be joined in 2023 by a hybrid, featuring a petrol engine and two electric motors.

Pre-orders for the Jogger will open in November, with the first deliveries expected in the first quarter of 2022. Specs and prices are yet to be announced.