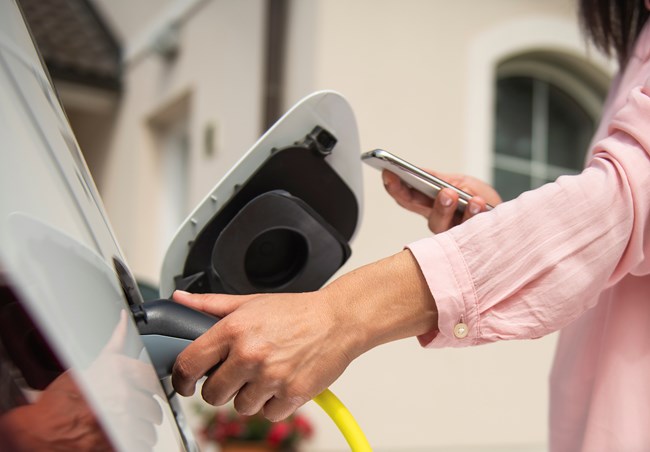 A new scheme has been launched allowing drivers without off-street parking to park and charge an EV at a dedicated location near their home.

FleetCharge, from parking platform JustPark in partnership with Octopus Energy, will identify a suitable space where a charger can be installed within five minutes' walk of a given driver's residence.

The driver will then have guaranteed, exclusive access to that charger for the duration of their contract.

Potential locations where chargers might be installed include residences, business premises, and public car parks.

Speaking to Business Car, JustPark director of EV Mike Strahlman said that there was a clear need for the service, with around 40% of UK drivers not having access to private off-street parking, and potentially up to 75% of fleets JustPark had been in contact with saying their drivers did not have the ability to park and charge at home.

He said: "In the fleets we are talking to, when they talk about their electrification ambitions, they mainly talk about the sort of low-hanging fruit, which are the drivers with driveways, and then they are saying 'we don't know how to solve this for drivers without driveways'. It's a real industry challenge."

Strahlman said that FleetCharge effectively gives drivers a proxy for their own private driveway, allowing them to access cheap overnight electricity rates, rather than relying on charging during the working day.

He said: "When people are driving all day, they don't want to take earnable time out of their schedule in order to charge, and I think that's one of the big fears.

"Not that public networks aren't great - they have a use case and there are benefits of those - but [as a driver], I don't [want to] have to rely on that and take time out of my day to find a space, to wait in line, to potentially have some of the issues associated with some of the charging hardware that may or may not work.

"We will avail them of reliable, convenient overnight charging access, so they can just get on with their day and not worry about it."

Strahlman said that FleetCharge offers a genuine nationwide service, catering for rural areas as well as big cities, and would use a combination of spaces from JustPark's existing parking network and new locations.

He said: "One of our first partners will likely be London-based, but that doesn't mean it isn't nationwide. The reality is that the same problem exists everywhere, and our superpower as it were is that we have this experience through 15 years in the parking industry of being able to find and source space anywhere in the country.

"There will be cases where, [within] that five-minute radius around somebody's postcode, we may not have a parking space yet, but we as an organisation do that every day, finding parking spaces with that kind of remit, so that conversion is part of this proposition."

The FleetCharge offer consolidates the total cost of charging, parking and hardware into a single price per driver.

Strahlman said that FleetCharge also offers an all-in-one charging system for drivers with off-street parking, as well as those without.

He also said that as well as selling directly to fleet customers, the service was also set to be marketed through car manufacturers and leasing companies.

In addition, according to JustPark head of B2B marketing Matt Shirley, FleetCharge offers benefits not only to its direct customers, but also for the wider energy grid, due to its ability to decentralise charging.

He said: "Imagine you have every morning two million drivers queuing up to use rapid chargers on the way to work, you'd have incredibly steep spikes, and risk to the network.

"If we have a majority of drivers charging domestically or at businesses at a lower kW rate overnight when the demand is lower, the grid is much more balanced and secure."

The involvement of Octopus Energy means FleetCharge - which is also available to Octopus's existing fleet customers - provides 100% renewable energy, and also comes with access to the roaming Electric Juice network.

Octopus Energy Services CEO John Szymik said: "Transport is responsible for a third of all UK carbon emissions, and electrifying fleets will play a key role in the race to net zero.

"Many fleets are struggling to electrify because of charging infrastructure and lots of drivers take vehicles home after work and those who live in a flat, terraced house or rented accommodation require access to a charge point.

"By giving fleet drivers reliable access to EV chargers close to their homes, we help businesses drive their decarbonisation efforts at scale."