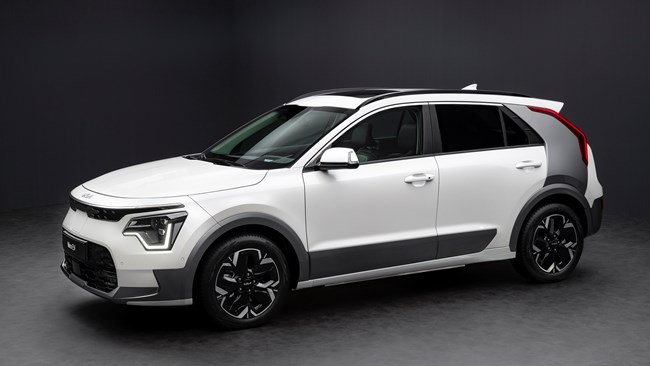 Kia has fully unveiled the all-electric and plug-in hybrid versions of its second-generation Niro crossover.

As with the previous model, the new Niro will be available as a full EV, plug-in hybrid, and conventional hybrid, and having announced details of the latter powertrain earlier this year Kia has now revealed more about the other two.

The all-electric Niro will feature a 204hp electric motor, along with a 64.8kWh battery, giving it a provisional range of 287 miles between charges on the official WLTP cycle.

A 10-80% battery charge will be possible in 43 minutes using a DC rapid charger.

As for the PHEV, it pairs a 1.6-litre petrol engine with a 62kW electric motor, for a combined output of 183hp. Kia says it will have an electric-only range of up to 40 miles on the WLTP cycle.

A new feature of the PHEV is a 5.5kWh positive temperature coefficient heater, which is said to extend the electric range in colder weather conditions.

An intelligent Green Zone drive mode will also feature on the PHEV and conventional hybrid models, with the vehicle automatically switching to electric-only mode around areas such as schools and hospitals, or in areas manually selected by the driver.

As previously announced, the conventional hybrid pairs the 1.6-litre petrol engine with a 32kW motor for a 141hp total output.

Available interior tech with the new Niro will include two 10.25in display screens, and a 10in head-up display.

UK specs and prices for the new Niro are yet to be announced.