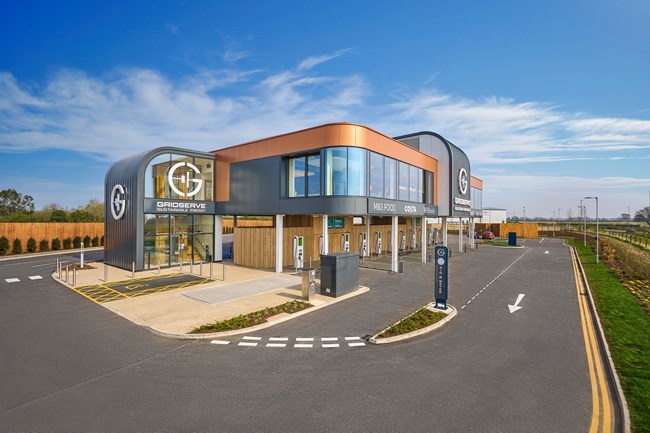 The new site, in Norwich, features 22 350kW chargers, eight 250kW Tesla Superchargers, and six low-power AC chargers, along with facilities from retailers such as Costa Coffee, M&S Food, and WH Smith, bookable meeting facilities, and opportunities to talk to 'EV Gurus' about charging and leasing options, with EV test drives soon to also be offered from the site via Gridserve Car Leasing.

The Norwich forecourt follows the opening of the first such site in Braintree in 2020, and the company eventually plans to have over 100 such facilities across the country.

That's in addition to its developing network of charger hubs at motorway service stations, following on from Gridserve having taken over the Electric Highway network from Ecotricity last year, and recently completed a programme to replace all the pre-existing chargers it inherited.

Speaking to Business Car at the opening of the Norwich site, CEO Toddington Harper explained that the Electric Forecourt network would primarily serve a different purpose to the motorway chargers.

He said: "Think of a petrol car ­- you fill it up mostly at your local petrol forecourt. What this [site] does is it fills that similar role, and most of the time it's people in the Norwich area that are going to be using it.

"There do happen also to be a lot of people who go past the door, because we are also next to very busy roads, but that is principally the function, and that then serves businesses in the local area, individuals in the local area and passing through, and also is essential we think for people who don't have the ability to charge at home.

"Then, for when people are travelling on a journey, we put hubs in locations that are already suitable, where you can get a coffee, that are reasonable places to hang out and provide a good experience while vehicles are charging. And it's a combination of hubs and forecourts that creates an overall network that we're focused on."

Fleets adopting EVs are often advised to plan around using mainly home and workplace charging, but Harper believes public chargers are in fact the most useful for businesses.

He said: "If people are taking vehicles home at night, that's great, home charging is clearly a good idea. If you are going on a long-distance journey, then you need to have charging en route, and we're putting in electric hubs, with six or 12 very high-powered chargers.

"That's very useful, because if you are looking at the business sector, businesses don't want their people queueing for charging - that's not a very efficient use of corporate time.

"So, putting chargers in where people can charge very quickly en route is essential, and equally if you are serving a particular area, which is what Electric Forecourts do, then it means businesses who principally inhabit that local area can transition their entire fleet to electric very quickly and cost-effectively."

Harper cited the example of a Royal Mail depot near the first Electric Forecourt in Braintree, which he said was electrifying based solely on Gridserve's facility.

He said: "They are not spending a pound on charging infrastructure. They don't have to do any of that complexity that we have had to in relation to grid connections or this and that, they've just gone and ordered 70-odd vehicles. All of them charge exclusively at our Electric Forecourt, and it works very well for them.

"If we didn't have an Electric Forecourt in the area, they wouldn't have been able to do that. It would have cost them a lot of money and been very complex."

According to Harper, fleets will be able to rely on vehicles not facing big queues to charge at Electric Forecourts due to the company's policy of investing in facilities before they are required, something also seen in the installation of 350kW chargers, which exceed the maximum charging capacity of vehicles currently on the market.

He said: "What we are doing is laying out a huge amount of capital on chargers which no vehicles can use to their full capacity today and we are putting far more in so that people have the confidence to transition.

"We are investing well ahead of demand. If we find ourselves in a situation where there are massive queues, then there are opportunities to add additional charging bays to this site, but I don't think we are anywhere near that and probably won't be for a few years."

On the subject of the wider public charging landscape in the UK, when asked about the UK Government's recently announced target of 300,000 public chargers by 2030, Harper said that while Gridserve had a 'very good' relationship with the government, he was cautious about the number stated.

"For example, we have 22 350kW chargers here, eight 250kW Tesla chargers and six AC chargers. We could instead have a few hundred 7kW chargers, but that would not be as useful as the chargers we have got, because we can charge a car in 20 or 30 minutes, whereas the same level of charging power for a 7kW charger is going to be there for many, many hours.

"Just putting chargers in the ground and saying 'Hey, I've got X many thousand' isn't really what customers want. What customers want is the best charging experience and that isn't about more chargers it's about the right chargers."

"If you've got a home charger, 7kW is perfect, let's go and put them in 300,000 homes - sounds like a very good idea, apart from the grid would struggle. But is that the right solution for public charging? It depends where.

"In a car park, probably, if the car is going to be there all night. If it's going to be there three hours, probably not. Half an hour, definitely not. You need to work it out like that rather than get too obsessed with numbers, otherwise we might end up with 300,000 chargers that aren't that useful."