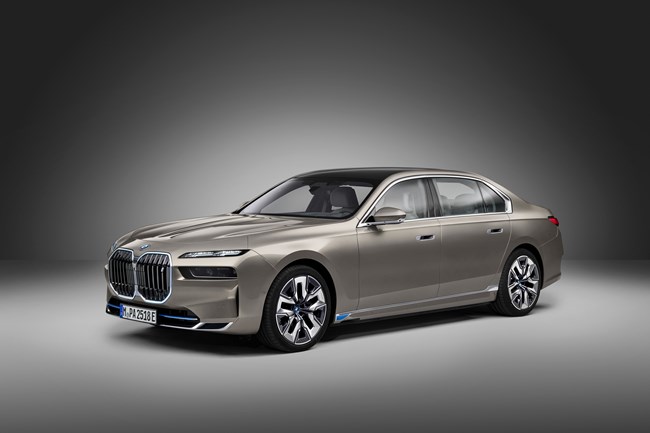 BMW has unveiled the new, seventh-generation version of its 7 Series luxury saloon.

For the first time, the new model will only be offered with plug-in powertrains in the UK, including a fully-electric i7 variant, alongside 750e and M760e plug-in hybrids.

The i7 will be the first to arrive later this year, with two electric motors providing a combined output of 544hp, and a 101.7kWh battery expected to provide a range of 367-388 miles on the WLTP cycle.

Then early next year the 750e and M760e plug-in hybrids will arrive, offering 490hp and 571hp respectively, and both having a predicted WLTP electric range of 50 miles thanks to 18.7kWh batteries.

A flagship i7 M70 electric model will then join the range later in 2023.

The new 7 Series will only be offered in the UK as a long-wheelbase model, with a choice of M Sport and Excellence equipment grades.

The model's interior will available with a 31.3in Theatre Screen set-up for rear-seat passengers, and also with automatically opening front and rear doors.

In the front, BMW's new Interaction Bar will make its debut, hosting touch controls for features such as the ventilation system and hazard warning lights.