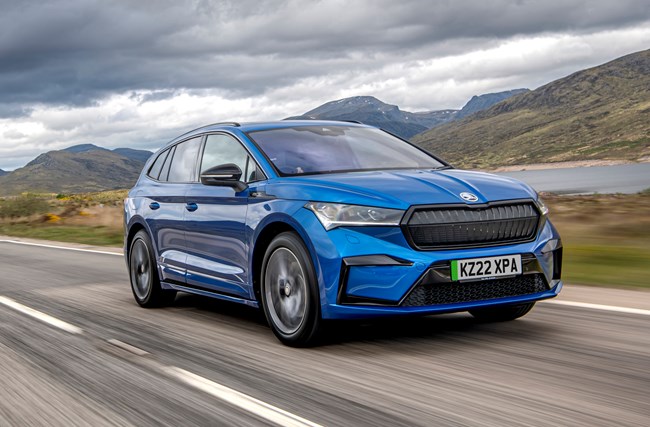 Skoda has introduced upgrades for its electric Enyaq iV.

In addition, all-wheel drive Enyaq iVs now come with a new selectable 'Traction' mode. This increases anti-slip regulation, and is designed to optimise drive distribution between the front and rear axles.

Also new to the Enyaq iV range is a 'Battery Care' mode, designed to set the optimal charging settings for extending the life of the battery. When activated, the next charge will be to a maximum of 80%.

Another update is to the car's infotainment system, with drivers using the sat-nav now able to view an estimated battery level for when they arrive at their destination, while a redesigned charging screen now displays more information, including AC charge options and predefined charging and preconditioning for the cabin.

In addition, Enyaq iVs specced with the Assisted Driving Plus package with Travel Assist now come with extra features including Narrow Lane Assist, which recognises temporary yellow lines, barriers and cars in the next lane and guides the car through narrowed spaces. In addition, the steering wheel travel assist button will now allow drivers to toggle between travel assist modes as well as activating and de-activating the system.