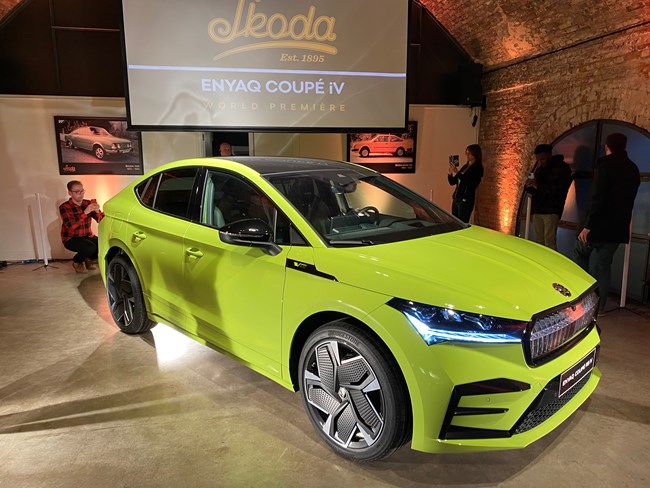 Skoda has revealed a new Coupe variant of its electric Enyaq iV model.

Unveiled today, including at an event in London, the Coupe features a more rakish roofline, which according to Skoda not only brings style benefits, but also improved aerodynamics, allowing a provisional range of up to 339 miles on the WLTP cycle, compared with 333 miles for the existing Enyaq.

The Coupe will be available with a single 82kWh battery option, and a choice of 201hp, 261hp, and 295hp powertrains - the latter with a vRS performance model.

A 10-80% battery charge will be possible in 29 minutes with a compatible rapid charger, while an overnight recharge with an 11kW wallbox should take six to eight hours.

Boot capacity is 570 litres, compared with 585 for the regular Enyaq.

A panoramic glass roof - said to be the largest in the Skoda range - will be standard.

Standard interior technology will include a 13in infotainment screen and 5.3in Digital Cockpit screen, while an augmented reality head-up display will be optional.

Available interior trim will include seat covers made from natural wool and recycled bottles.

The Enyaq Coupe iV is set to go on sale first in the UK this summer in vRS form, with the rest of the range following in the autumn. Prices are yet to be confirmed.