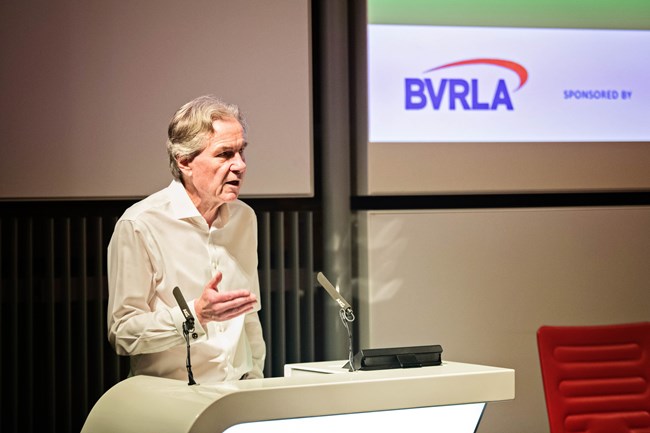 Rental and leasing fleets are on course to outpace the UK Government's zero-emission targets, according to the BVRLA.

However, it's not all plain sailing for the sector, with other discussion points at the conference including the effects of ongoing industry supply problems on EV deployment, and the spectre of less favourable tax rates potentially arriving in future.

Keaney said: "Battery electric cars already dominate the order banks for our members. This sector could realistically, dependent on supply of course, hit the 2030 [new ICE ban] target in advance of 2030, such is the strength of the order intake that BVRLA members are generating and delivering.

"The latest data shows that new electric car registrations have now, for BVRLA members, overtaken petrol. So, momentum for electric cars is building and we are very confident that it will only continue to build, if the government does not introduce any disruption to that marketplace, and doesn't feel the need to apply a handbrake that might slow down momentum by introducing something like a major change in the BIK tax regime.

"There is almost no incentive left now behind electric cars, and that BIK regime we think is a very, very key driver of growth in this important fleet sector."

One of the panellists at the event, Zenith car and van division CEO Ian Hughes, warned that a potential increase in BIK rates for EVs - currently at 2% - might see effects mirroring those seen in the ICE company car market a few years ago as rates for those vehicles increased.

He said: "BIK is the elephant in the room. If you're looking for a parallel, when we saw ICE vehicles BIK taxation really take hold, everybody was opting out and going into diesels because they just wanted to do what they wanted to do, and BIK tax was not a benefit. That was a really key moment.

"It will be make or break - no matter how good the technology is, that could be a real challenge for us if that BIK is seen as a massive opportunity to recover revenue."

One incentive the UK Government has already removed is the plug-in car grant, and while the BVRLA's Keaney described this move as "disappointing, but not a surprise", Stellantis B2B director James Taylor, also speaking at the event, explained that this had particularly affected the affordability of small EVs.

He said: "It's already the segment with the lowest share of plug-in or fully electric vehicles and it doesn't have that whole life cost argument, because these cars typically go less miles a year.

"[Making them affordable] is going to be a real challenge, but it's such a big part of the market we will have to find a solution for that. There might have to be more solutions like the Citroen Ami [quadricycle] or more car sharing."

As well as the removal of the grant, Taylor also warned, when asked when EVs would achieve price parity with ICE vehicles, that the current industry supply problems might mean this was delayed further into the future.

He said: "I think the thought was when Euro 7 [rules are introduced], that was when production costs would probably equalise, but supply chain pressures now might put that under a little more pressure, both in absolute terms, because [EVs] are more expensive to make, so the percentage is a bigger amount by definition, but I think also in relative terms electric cars are getting more expensive to produce through supply restrictions than ICE.

"When we had the plug-in car grant you could make an argument for the consumer that overall, we were in parity on total cost of ownership, but now that's gone. Larger cars are perhaps a bit easier since they do a bit more mileage."

The car industry has been dealing with severe supply problems for well over a year now, but when asked how long the situation would persist, Advanced Propulsion Centre chief executive Ian Constance raised hopes that it would not be for too much longer.

He said: "I think predictions people have been coming up with say towards the autumn that [supply] should start to free up, and certainly by the end of the year.

"There is a lot of investment going in. If you talk to industry insiders, what they say is we won't be talking about chip shortages next year, we'll be talking about oversupply and trying to keep margins up."

The BVRLA's Keaney, however, struck a less optimistic tone.

He said: "We've seen fewer vehicles coming through into the market, we've seen existing orders cancelled at very short notice, we've seen existing supply agreements cancelled at very short notice, with rather limited discretion and rather limited explanation, and while some reports suggest that the supply issues affecting the sector are coming to an end, I think there is still some way to go. There is no short-term solution to some of these issues."

During the conference the BVRLA also held a series of live polls seeking delegates' views on the subjects discussed. Through this, a degree of pessimism was revealed about the government's 2030 date to phase out new ICE vehicles, with just 28% saying the industry was on track to achieve this, and 58% saying it wasn't - possibly due to electric van adoption currently lagging well behind that of electric cars.

There was however more optimism regarding the used EV market, with 61% of delegates saying they thought there would be sufficient demand for EVs being de-fleeted during the next three years, compared with 22% saying there wouldn't be.

As for the biggest obstacle in the way of widespread EV adoption, when asked to name this 69% of delegates went for infrastructure, compared with 26% saying supply and 5% demand.