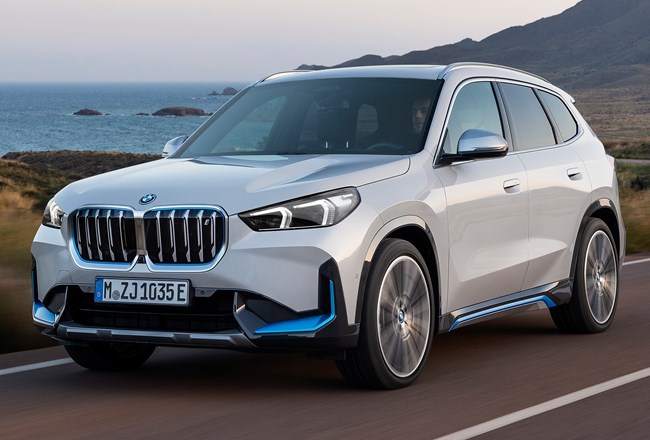 BMW has revealed the new, third-generation version of its X1 medium SUV, which will be available as an iX1 electric variant.

The iX1 will feature a pair of electric motors, producing a combined 313hp. A 64.7kWh battery will allow a range of 257-272 miles between charges (all figures provisional).

DC charging will be possible at up to 130kW, allowing a 10-80% charge in 29 minutes. AC charging capability will be 11kW as standard, with 22kW available as an option.

As well as the electric version, there will also be two plug-in hybrid X1s, with either 245hp or 326hp, featuring 14.2kWh batteries, with electric ranges of 48-55 miles.

Compared with the outgoing X1, the new version is 53mm longer, 24mm wider, and 44mm taller, with a 22mm longer wheelbase.

The model's interior features the latest BMW Operating System 8, and its Curved Display arrangement, which features a 10.25in driver display and 10.7in infotainment screen behind a continuous glass surface.