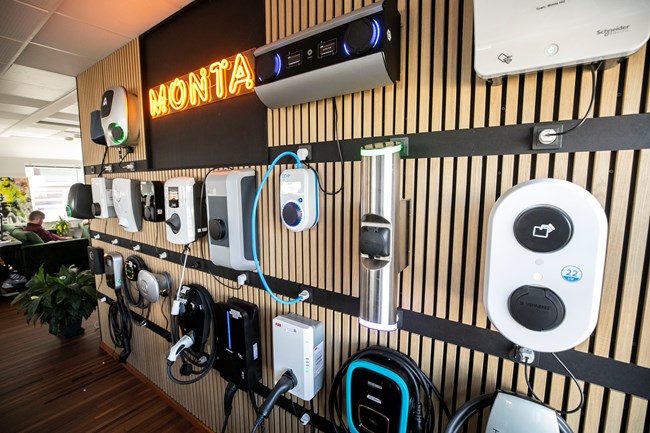 Allowing more private EV chargers to be used by the general public could play a major part in improving the UK's overall charging infrastructure and ending range anxiety.

Speaking to Business Car at the recent Fully Charged Live show, he explained how the capabilities of Monta's system, which he described as "a true end-to-end solution" for charging, could help achieve this.

For instance, he explained that chargers in an office car park could be set-up for use by employees during work hours, then opened up for public use at evenings and weekends.

He said: "A lot of people are very protective because they say they don't want people to enter their office bay to charge, but there are people who do see the value, helping the infrastructure, to keep it nine-to-five for employees and after five open it for the public to use it.

"I think that's one thing that needs to change in the UK, because more and more companies need to open that up. That is the only way we are going to get more charge points publicly available, because if you look at it, we have got 30,000 public chargers, but there are so many private chargers installed that are not available for the public.

"If these companies start to do this, keep it private for work hours and after work hours make it available for the public, then all of a sudden we have got no more range anxiety."

He said: "People who have a domestic charger, if they have a driveway, can also open their charger for other people, so they can make it public. We have probably in the UK around 200,000 home chargers - imagine if you make them public?

"[Alternatively] they can invite selected people. They can say I don't want to make it [totally] public, but I want everyone on my street to be able to charge."

From a company car fleet point of view, Dubey explained how Monta's platform, which has both operator and driver functions, can be used to help with charging management.

He said: "if you offer a company car to an employee, this employee can charge the car at home, and [the employer] can reimburse the money in real time.

"The same employee can use company wallet, a virtual card from a company, and then use it to charge the car on the road, so they are not paying anything from their pocket - it's all getting billed to the company."

According to Dubey, Monta's platform is currently compatible with 96% of charge point manufacturers' products - ones which meet the OCPP 1.6 standard. It is capable of working with new chargers, and also pre-existing ones which can be remotely switched to Monta's system.

Dubey said: "The word that sticks out for Monta is seamless. We want to make everything seamless.

"People should not worry about charging their car at home, or public charging. The problem is not infrastructure, the problem is people don't feel comfortable with the technology.

"If you make that journey smooth, they will jump on the EV journey, because it's just that the experience needs to be better."