Can Audi's performance SUV possibly be a suitable fleet option?

Unless you've spent the past year living on the moon, you won't have escaped 'Dieselgate' and the furore surrounding the VW Group's antics.

Early ramifications have seen Porsche pull all diesel power units from its line-up and now, Audi's SQ5 - a car closely related to the Porsche Macan - has ditched its biturbo diesel engine in favour of a 3.0-litre V6 petrol engine.

It's not just any old lump either, but the same 349hp 3.0-litre turbocharged petrol engine that you'll find under the bonnet of Audi's hot-shot S4 and S5 models.

That's great news for performance junkies, but it will be about as welcome as a poke in the eye to parsimonious fleet managers.

Relatively high CO2 emissions at 189g/km mean the latest SQ5 is not particularly kind to the atmosphere, or easy on your wallet, as you'll be hit with a BIK bill levied at the most punitive rate. That said, if Audi had continued with diesel power, it too would have fallen into the top tax rate under the latest regimen.

Of course, what will really cause fleet managers sleepless nights is the amount of unleaded the SQ5 will chomp through. You can forget the 34mpg claimed by Audi; on our test outings we averaged just over 22mpg.

The only time the SQ5 feels in anyway slow is in its initial responses when moving off from standstill. Even then, it just feels like the smooth shifting eight-speed automatic transmission is double checking the appropriate gear is securely rammed home before unleashing the engine's explosive performance. Nail the throttle and the immense turboboost propels the SQ5 from 0-62mph in 5.4 seconds. That's quicker than most hot hatches, including the Honda Civic Type R.

The fast-running SQ5's steering feels assertive and weighs up well as speeds increase. While the ride is on the firm side, body lean is kept to a minimum, especially when cruising along in dynamic mode.

A price worth paying

Our test car was fitted with an optional sport differential, which distributes torque in continuously variable proportions between the rear wheels, boosting grip and traction. It costs £1,200 - but given the levels of performance on tap, it's probably a price worth paying.

Although it misses out on Audi's latest twin-touchscreen infotainment set-up, in practice, the tried and tested MMI is simpler to use than any touchscreen when driving, thanks to its easy-to-use rotary dial and selection of primary-use buttons.

Not surprisingly, the SQ5 is just as spacious as a Q5. This means leg and elbow space in the front aplenty, while the high roofline provides a generous amount of headroom for all occupants.

It even has a bigger boot, at 550 litres, than rivals such as the Mercedes GLC 43 AMG and the Porsche Macan. There is, however, a small load lip that you may struggle to lift things over if you're slightly short of stature. 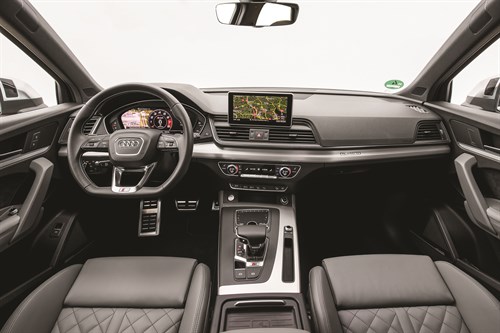 At a smidgen over £51,000, the SQ5 is properly pricey. To put it in context, a similarly powerful Porsche Macan S costs less - albeit in relative basic specification. While both cars will cost an arm and a leg to run, the SQ5's residual values won't remain as strong as its Porsche counterpart.

That said, if you like the idea of toasting hot hatches for breakfast, in relative low-key fashion, while sitting in lofty splendour, surrounded by palatial luxury, then the SQ5 could just be your ideal guilty pleasure.