In case you hadn't noticed, diesel cars don't seem to be as popular as they once were. Genuine concerns over air pollutants such as NOx have been transferred to the latest diesel cars that comply with ever-tighter emissions regulations.

Consumers have already been voting with their wallets - witness the decline in the diesel car market of almost 30% in 2018 - although the share of diesel new car sales to fleets is still rather higher than in the retail market.

So here we are, trying the second-generation Audi Q3 - a medium SUV - in petrol form. It was our first chance to try the car, although customers can order TDI variants.

The range has a staggered introduction, however. The first diesel versions available were manual all-wheel drive quattros (2.0-litre 35 TDIs with 150hp), with front-wheel drive S-Tronic automatics following a little later. There will also be 190hp 40 TDI variants joining the range.

The most promising petrol

Our test car is a 150hp 1.5 TFSI - badged 35 TFSI by Audi, although the number is not directly related to engine size or power - with S-Tronic.

Of all the petrol versions of the Q3, this one is perhaps the most likely to win over company car choosers from diesel (although we would urge anyone to do all the calculations before making such a momentous decision).

The 1.5-litre turbocharged engine offers plenty of power when needed, but also comes with 'cylinder-on-demand' technology, which can temporarily deactivate two of the engine's cylinders on a light throttle load or when coasting, reducing fuel consumption.

It is the same engine as we have been running on our A3 long-term test car, and certainly more fleet-friendly than the 190hp 40 TFSI and 230hp 45 TFSI. 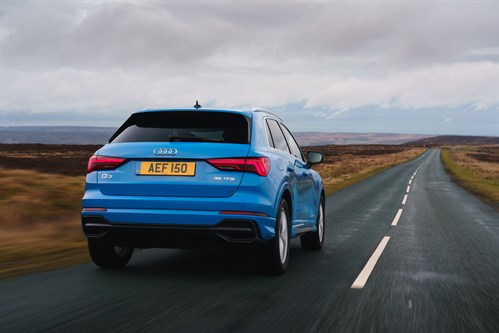 As things stand, you would be forgiven for looking at the petrol version seriously, as the equivalent diesel currently on sale is the manual emitting 149g/km, and if you factor in the 4% supplement on diesel cars, BIK tax for this model (as well as employers' national insurance contributions) is almost a third higher than for the petrol variant we have on test.

While our A3 test has been relatively frugal on the commute, the chunkier and heavier Q3 doesn't look so impressive, with average MPG in the low-40s. You'd imagine a front-wheel drive diesel ought to be capable of 50mpg.

Perhaps the most useful and noticeable change with the new Q3 is its more spacious interior and luggage compartment. The wheelbase is 78mm longer than before, while the car is 97mm longer overall and 18mm wider.

The interior is also more versatile, with the 40:20:40 split rear bench able to slide forward and backward 150mm to vary the amount of luggage space available. This offers a minimum of 530 litres, increasing to 675 litres with the seat in its most forward position.

The new interior comprises a standard 10.1in touchscreen in the dashboard centre, with navigation, as well as Audi's 'virtual cockpit' configurable digital instrument display. 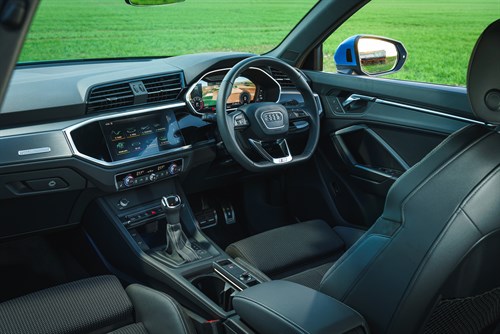 These give the Q3 an upmarket, hi-tech feel compared with its predecessor (where the display screen was smaller and the virtual cockpit was an expensive option), although the overall finish of the interior, particularly the materials, don't feel quite as plush as some other Audis.

The Q3 is comfortable on the road and the 150hp motor is quite responsive, given the occasional hesitancy of the dual-clutch auto transmission if it fails to predict the need for a sudden burst of speed.

Ride comfort is pretty good too, considering we were in an over-wheeled S Line test car with lowered sports suspension. But maybe it would outstay its welcome on poor road surfaces.

The Q3 feels like a big step forward compared with its predecessor, but probably isn't as desirable as the Volvo XC40. And with a new Range Rover Evoque on the horizon, it will have its work cut out to maintain visibility among user choosers.