When BMW first introduced the X6 - a large SUV with coupe-inspired styling - it was reasonable to ask whether even in the context of the ongoing SUV boom it was a niche too far.

However, sales figures proved that it wasn't. Naturally, this meant BMW's German rivals would respond, and for Audi this meant the car tested here, the Q8. Effectively a sportier counterpart to the Q7, it is also billed as the flagship of Audi's SUV range. Can it make the big impression such a position demands?

Well, from looking at the pictures, you might initially think the Q8 surprisingly discreet. Compared with the X6's divisive, yet unarguably attention-grabbing looks, the Audi is more conservative. But what doesn't come across in the images is the sheer size of the thing. It is longer, wider and taller than the X6 - hardly tiny itself - and this gives it a dominating road presence, towering over other cars - even other SUVs. 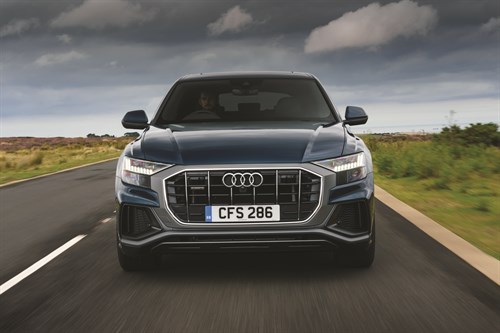 For the directors and chief execs likely to be considering such a model, this may well be just the ticket. But there is an obvious downside - have cause to thread the Q8 down a narrow country lane and it suddenly feels very wide indeed, inducing winces when cars pass in the other direction.

The country road size issue is a pressing concern since Audi clearly doesn't expect Q8 drivers to be dawdling down them. Alongside a powerful engine - the 286hp diesel can shift more than two tonnes of Q8 from 0-62mph in just over six seconds - the model's sporting pretensions are further supported by the adaptive air sports suspension, which allows things to be firmed up for hard cornering using a dynamic mode. Unfortunately, if anything this makes it a bit too firm, meaning you get bashed about a bit during brisk driving. It combats body roll well, and standard four-wheel drive means abundant grip, but overall the chassis can't overcome that weight enough to deliver a fun drive, feeling nose-heavy and not very agile.

A better bet is to leave the settings alone and adopt a relaxed cruise, but even then the ride isn't as serenely smooth as you might expect, especially at low speeds, while on motorways a bit of wind noise is noticeable. The eight-speed automatic gearbox can also be slow to change down when accelerating.

One unqualified success, however, is the adaptive cruise control - a cost option with the S Line equipment grade tested here - which, combined with lane-keep assist, makes any motorway journey a stress-free prospect.

To ensure the driver's calm disposition isn't then disturbed when they arrive at their destination, front and rear parking sensors and a reversing camera are standard, and a fun option is the 360-degree view, which displays a virtual perspective image of the Q8 and its surroundings on the in-car touchscreen, effectively turning your parking manoeuvre into a video game. 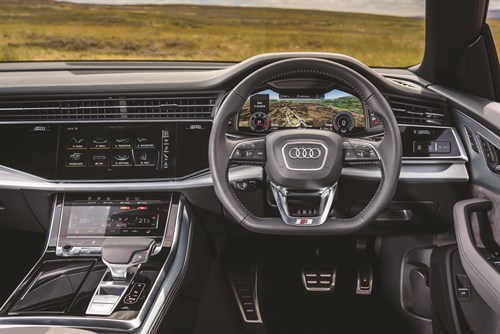 As you would expect, the fit and finish of the Q8's interior is of the highest standard. A particular highlight is the brushed metal detailing around the inside door handle and on the dashboard. The full gamut of Audi's impressive infotainment setup is deployed, meaning a main 10.1in central touchscreen sitting above an 8.6in display that handles comfort settings - although those might be better handled by physical controls - and the fully digital Virtual Cockpit display in front of the driver.

The front seats are a touch firm, and while there is loads of rear legroom, the swooping coupe roof means headroom in the back is average, although it is difficult to complain about more than 600 litres of boot space.

We would assume that drivers considering a Q8 won't be too worried about saving money on tax, and that is just as well, as predictably it sits in the top 37% BIK band, as do all its rivals. However, it does offer very strong residual values - nearly 4% stronger than the X6, helping it to a cost-per-mile saving of between 3p and 7p, depending on which engine the BMW is specced with.

The Q8's fuel economy is decent too, aided by mild-hybrid technology that deactivates the engine when coasting or coming to a stop, helping to eke out an extra few miles from each tank. This all adds up to a slight financial silver lining as far as premium SUV motoring goes.