The third-generation compact hatchback from BMW goes front-wheel drive and gets an interior overhaul.

"One in every five BMWs sold is a 1 Series," BMW UK small cars product manager Gareth Griffiths points out. "So it is critical to the success of the brand, a high conquest car and also the first BMW vehicle for many customers."

Moving to a front-wheel drive architecture and a transverse (sideways-mounted) engine has allowed the bonnet to be shortened, and the windscreen and bulkhead to move forward to gain precious interior passenger space, despite losing 50mm in overall length. The new 1 Series - on sale now - is also only available as a five-door hatchback, the three-door having been dropped as it only sold in small numbers (10-15% of the previous model's total).

Engines are carried over, but BMW claims some mpg and CO2 improvements, although customers should note that the initial CO2 figures will change on some models with registrations after April 2020, when WLTP numbers (rather than NEDC-correlated ones) relate to company car tax bands. 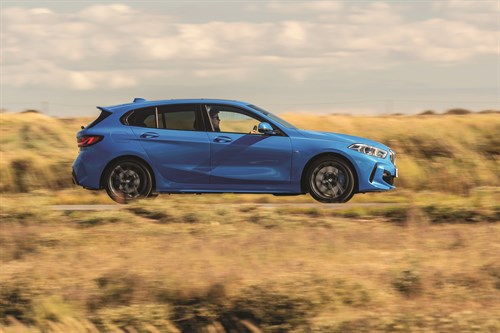 For the 118i petrol version, for example, that will equate to a bump from 26% to 28% BIK, although all the 1 Series diesel engines will remain in the same brackets due to new RDE2 compliance (see later).

Competition is tight in this compact hatchback segment, from the well-regarded mainstream Ford Focus to the now firmly established premium Mercedes A-Class and Audi A3. However, Griffiths still expects to sell similar numbers to the previous model - circa 25,000 in this changeover year and 30,000 in 2020.

Key to that predicted success is the 116d's RDE2 compliance already, so the BIK diesel penalty can be waived, and Griffiths says the other two diesels - the 150hp 118d and 190hp 120d - will be similarly compliant by March 2020. 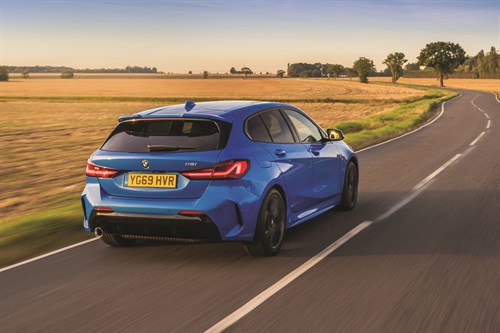 A cabin bristling with new infotainment and driver aids inspired by the 3 and 8 Series brings the car more in line with Audi and Mercedes, and includes options like head-up display (£750), gesture control (£300) and also Apple Carplay, with Android Auto available by mid-2020.

Only the two launch petrols - the 140hp 118i FWD and 306hp M135i AWD - were available to test, and although the latter go-faster model was amusingly rapid and fun to drive, its weaker mpg (35.8), emissions (155g/km) and small fleet significance precludes us from talking more about it here.

By comparison, the three-cylinder 140hp 118i - and predicted overall bestseller - is much more suited to business motoring, offering perfectly adequate acceleration (0-62mpg in 8.5secs) and 44.1-47.1mpg, depending on gearbox and wheel version.

Despite the switch to front-wheel drive from rear-wheel drive, the car still steers and handles well and the ride was fine on the roads we travelled along (not always a given with premium German marques). 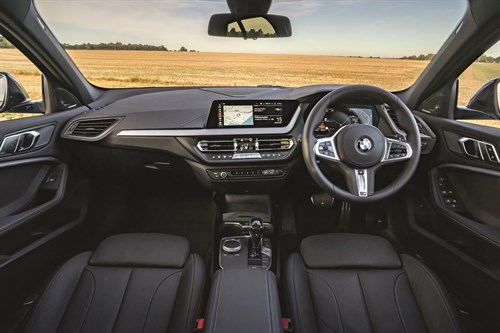 BMW made much of the better touchscreen infotainment and it does work pretty well, but the larger 10.25in Live Cockpit Professional - where the features really stand out due to the 7.0 operating system - is a £1,000 option on all but the top-end M135i. In the practicality stakes, the MK3 has a 67mm-wider luggage compartment and a bigger 380-litre boot with rear seats up (versus 360 before). That figure matches the A3 and trumps the A-Class (by 10 litres) and with seats folded the 1 Series's maximum rises to 1,200 litres.

In summary, the new model is decent to drive - as always - and BMW has made great strides in cabin quality and infotainment, but also as always, the customer has to pay extra for most of it - including Apple Carplay, which is a bold move. Let's see how the competition reacts.