BMW's 7 Series gets a raft of updates for 2019. Are they significant enough to challenge the all-conquering Mercedes S-Class?

You have to wonder which crazy cat in BMW's marketing department came up with the 'Life Cycle Impulse' strapline. As if some engineer woke up one morning and thought, you know what, I am feeling a bit impulsive today, how about we give that 7 Series range a bit of a shakeup? In reality, the exact opposite is true.

Long before the final design sketch was whisked off the drawing board, the 7's engineering schedule was already cast in stone, with a mid-life model update scheduled for 2019.

Sure enough, bang on the button, those upgrades have arrived.

Changes include a refreshed engine line-up comprising six, eight and 12-cylinder petrol engines, a pair of freshly calibrated six-cylinder diesels, and a six-cylinder petrol-electric hybrid that now offers a claimed electric-only range of up to 36 miles.

BMW is also keen to point to the striking new exterior design treatment, (as if you could possibly miss it), which is dominated by a grille big enough to cool the infernos of Hades.

Building on this 'more metal for your bucks' theme, both standard and long wheelbase variants have grown by 22mm compared with their predecessors, while the longer version boasts an additional 14cm of legroom over the standard car.

Regardless of wheelbase, you will feel pretty special driving or being driven in the latest 7. Surrounded by oceans of fine leathers, and bombarded by sensory delights, including silky controls and one of the sharpest and most intuitive infotainment systems currently known to man, everywhere you gaze looks spectacularly Hollywood. 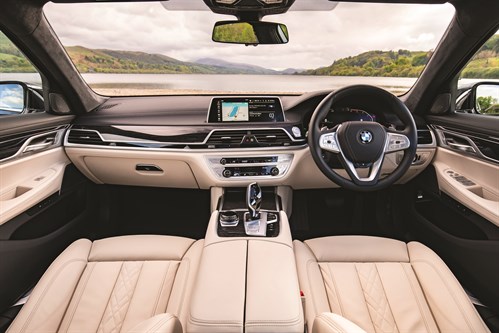 While all the infotainment menus can be accessed via a rotary dial, the screen itself is touch sensitive, and there is also gesture control, which allows you to skip music tracks, or change the volume by waving your hand at the dashboard. In practice, it is a pretty hit and miss affair at best, so you will be better off relying on the excellent voice control.

You can also specify BMW's rear entertainment package, which features a pair of rear screens that can be used to stream films or employed as laptops.

Even in standard wheelbase guise, the 7 Series is over 5m long, so it easily provides enough interior space for four adults to travel in comfort. If you want to get properly slouchy and snoozy though, the rear seat comfort package adds extensive electric rear seat adjustment, powered sun blinds and a footstool.

For the most part, the driving experience is pretty special, too.

The straight-six cylinder 3.0-litre turbo diesel is a star performer, featuring exceptionally strong performance with only a hint of vibes felt through the floor under heavy acceleration and a wee bit of an abrupt stop-start activation tainting the otherwise impressive mechanical refinement.

If anything, the six-cylinder petrol hybrid powertrain feels even more in tune with the needs of a chauffeur driven limo, thanks to its low-speed silent running and super-slick transitions between electric and petrol power. 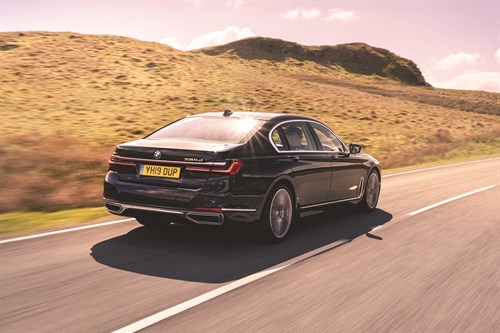 As for downsides; for some time we have been aware of some underlying shake in BMW's large car platform, which is especially noticable when colliding with more abrupt road imperfections, and this trait is all the more evident in the longer wheelbase vehicles. Think of it like twanging a 6in steel rule held at one end against the edge of a desk representing the SWB cars, then performing the same exercise with a 12in rule for the LWB models.

More positively, wind and road noise are extremely well isolated, thanks to thick acoustic glass on the side windows, and rear screen and hefty sound deadening around the rear seat area to provide a near hermetically sealed cabin ambience.

If you are smitten by the many positives of the 7 Series - and there are many - then the SWB 730d will be the cheapest to lease and fuel, while opting for a
long-wheelbase model will only add 1g/km to the SWB car's 138g/km CO2 emissions.

Even so, the 745e hybrid is also worthy of consideration. Granted, it's around £7K more expensive than the diesel alternative, but its lowly emissions of 48g/km make it a very attractive choice for user-choosers.