BMW has filled a gap in its expanding line-up with the new X7 luxury SUV.

Large SUVs have long been performing the role of luxury cars. Many chauffeur fleets now use them instead of saloons, and the higher entry point to the cabin offers better comfort, as well as better visibility when driving.

BMW's X5 was an early pioneer in the large SUV sector, along with the Mercedes-Benz M-Class. In the late 1990s, it was a novelty for SUVs to be optimised for on-road performance, and many more followed.

But while Mercedes-Benz went bigger with the GL-Class (now called GLS-Class), BMW moved faster to expand into smaller SUV models.

Now BMW has a direct rival for the Mercedes-Benz, as well as a tempting option for company bosses and chauffeur operators, in the shape of the new X7.

As well as targeting Range Rover drivers - especially those who need more seats occasionally - the X7 promises to be a luxury equivalent to the new 7 Series.

The X7 is available in three engine derivatives, all of which have six cylinders. Most buyers will be expected to choose the xDrive30d, which produces 265hp. There is a 340hp turbocharged petrol variant in the xDrive40i, while the current range-topper is the M50d, which is more performance-focused and comes with a 400hp quad-turbo 3.0-litre diesel.

No word yet on plug-in hybrid or other variants, but an ultra-low emission version is very likely, as it is already offered in the 7 Series. There are standard and M Sport equipment grades, while the M50d is a derivative in its own right. 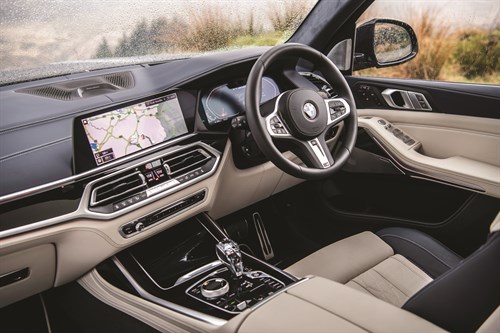 Seven seats are standard, while customers can specify an alternative layout with six individual seats. Seven-seat versions have electric folding mechanisms for the second and third rows of seats.

Even with all seven seats in place, the X7 has a minimum of 326 litres of luggage space - not far off a lower-medium hatchback. With all seats folded, it offers 2,120 litres up to roof height.

We drove the X7 on a fairly challenging off-road route on its standard tyres. For those so inclined, it is possible to select an off-road pack (except on the M50d).

It features its own special graphics in the instrument cluster and Control Display, as well as an extra button on the centre console for selecting four driving modes - xSnow, xSand, xGravel and xRocks.

Most fleet managers wouldn't condone one of the company's expensive assets being used in such extreme driving environments, and neither would we. But the X7 coped very well with some demanding grassy inclines and rock crawls, as well as a good deal of muddy ruts.

On the road, the X7 has a true luxury car feel. The cabin is comfortable, wherever you sit, and the car is easy to drive despite its obvious size. We didn't get any time behind the wheel of the M50d, but the M Sport versions of the xDrive30d and xDrive40i provide excellent composure along with a smooth ride.

Perhaps the most controversial aspect of the car so far has been its looks, with a degree of outrage on social networks over the seemingly ever-increasing size of BMW's grille design.

It is imposing for sure, and perhaps in keeping with a vehicle of this size. But some might take more convincing.