Honda hopes an innovative hybrid powertrain can make up for the absence of diesel from its new CR-V range.

While diesel may be in a continual and possibly irreversible decline, it still seems a brave call to move away from it when selling a family SUV.

However, that is just what Honda has done with its new CR-V. The company hopes to fill the void not just with petrol, but also with this new hybrid.

Unlike the plug-in systems that have found success in the likes of the Mitsubishi Outlander, it is a pure hybrid, like the one Toyota now has in much of its range and Honda previously brought us with its Insight.

Except that actually, it's not like those systems either. While those pair a petrol engine with a single electric motor, in the CR-V there are two motors, and in the main hybrid driving mode the petrol engine isn't directly connected to the wheels at all. 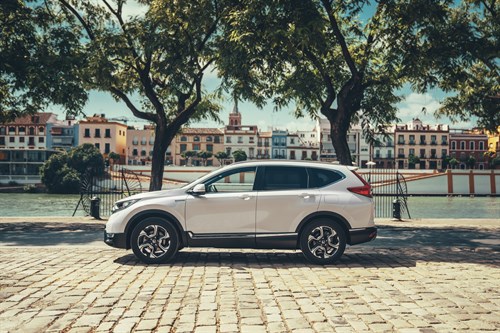 Instead, it powers an electric generator motor that charges a battery, which then supplies power to an electric propulsion motor, which drives the wheels, meaning petrol power is converted to electric drive in a similar vein to a range-extender electric vehicle (EV).

Other available driving modes are EV drive, which relies solely on battery power (although this mode only has a range of 1.2 miles before the petrol engine needs to fire up again), and engine drive, where the petrol engine is connected directly to the wheels via a lock-up clutch.

The setup is designed to keep the petrol engine operating in its most efficient rev range as often as possible, thereby saving fuel. It's available with front-wheel or four-wheel drive - the former is tested here.

One of the advantages of the powertrain is that unlike most hybrids there is no CVT gearbox fitted (these are often criticised for producing soaring revs under acceleration). Instead, the novel powertrain allows a single fixed gear ratio as more commonly seen in pure EVs. 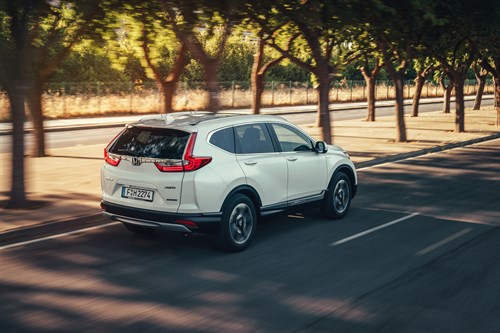 Unfortunately, accelerate in the CR-V and the revs do still rise, but it is not too noisy unless you push your foot right to the floor, and it is difficult to imagine most drivers deploying maximum acceleration very often.

They won't need to anyway - the combined powertrain delivers plenty of shove, and once at a cruise things are whisper-quiet. It is nicely refined around town too, where the battery can take over a bit more - the car switching between drive modes automatically and seamlessly.

Being a tall SUV with a heavy battery on board there is a little roll in bends, but the steering is crisp and precise, and it rides well enough - at least on the Spanish roads that comprised our test route.

The CR-V's largeness pays off on the inside. Climb aboard and the sense of space is immediately impressive - it feels big and airy. In the mid-range SE model tested here there are some scratchy materials used on the dash, but a mix of softer and glossier materials around the door make up for it a bit.

The touchscreen has useful shortcut buttons, but could be more reactive - it sometimes needs to be pressed more than once.

Unlike with the petrol CR-V there is no seven-seat option, but those riding in the back of the hybrid won't be complaining, as the amount of rear legroom is huge, even allowing adults to stretch out, and there is also lots of headroom. 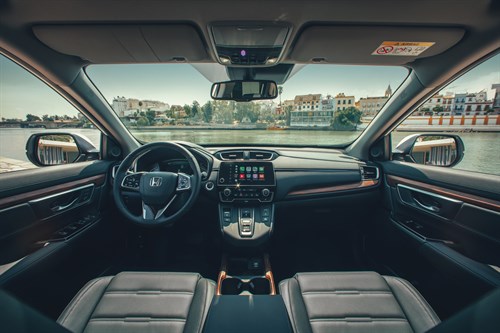 On the downside, the boot is 64 litres smaller than in the petrol model due to the hybrid battery being stored under the floor.

Where the hybrid CR-V's advantage over the diesel competition should be felt is in running costs. With combined fuel economy of 53.3mpg and CO2 emissions of 120g/km, it's well ahead of a diesel Volkswagen Tiguan (47.1mpg, 138g/km), even before you consider the higher cost of diesel compared with petrol and the 4% BIK surcharge oil-burners incur.

Handily, the CR-V hybrid also beats the petrol CR-V, which comes in at 44.8mpg and 143g/km. However, it does fall short of the 102g/km that Toyota is claiming for its new hybrid Rav4, which is set to arrive in April.