Can engine updates and improved specification help Jaguar's revised XE stave off the challenge from a new BMW 3 Series?

Jaguar's smallest sports saloon, the XE, recently received a midlife facelift and with the restyle came a new interior, and a new range of petrol and diesel engines.

The pair of 2.0-litre Ingenium petrol engines offer a choice of 250hp or 300hp, but it is the solitary 180hp diesel that might prove to be the most attractive to company car buyers. The D180 rear-wheel drive (RWD) model is the first in the segment to be certified as RDE2-compliant and so avoids the 4% supplement to benefit-in-kind (BIK) tax.

In a simplified model lineup, only three equipment grades are now offered - S, SE and HSE - although each version is also available in R-Dynamic guise, which adds trim upgrades such as sports seats and satin chrome gearshift paddles. A range of option packs enables buyers to further personalise their XE, but even the base model comes with a decent list of equipment as standard.

The exterior redesign makes the car look lower and wider, although Jaguar designers were at pains to insist the styling was 'assertive' not 'aggressive'. New bumpers front and rear, together with LED lighting, have improved its looks, while the update to the interior is probably the biggest difference buyers will notice. The wood, leather and plastics used have all been upgraded and so you get the feeling that the refreshed car is probably what the XE should have been right from the start. 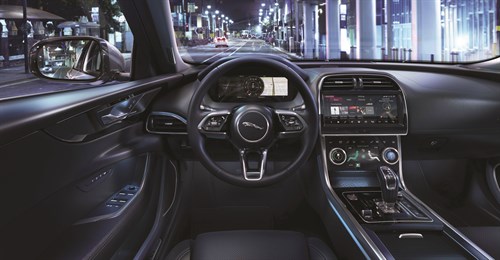 One of the options available is the new Touch Pro Duo infotainment system and interactive driver display lifted straight from the I-Pace, and the XE also gets the same steering wheel as its electrically-powered sibling. Similarly, the recently-launched Range Rover Evoque has contributed another option - its 'ClearSight' rearview mirror, offering the choice of a conventional mirror or the view from a rear-facing video camera hidden in the 'shark fin' radio aerial on the roof.

This was one of my only real complaints about the car - switching my view from looking through the windscreen to the mirror did need a moment or two for my eyes to refocus and so was actually quite distracting - but this is something a regular XE driver would probably get used to.

No huge changes were necessary under the skin and so not a great deal is different. Both the cars I tried at the car's launch - a D180 S and a P250 R-Dynamic SE - drove really well and the diesel, in particular, wafted along the twisty mountain roads of southern France as a true Jaguar should.

It is refined, too, with not much noise from the diesel engine, which should tempt company car buyers thanks to that RDE2-compliant status. The XE is one of the first cars to meet the strict NOx emissions targets, well ahead of the January 2021 deadline. The RWD D180 is capable of returning up to 57.6mpg in a best case scenario.

The diesel was also the base S model and so had the standard-fit equipment that included automatic transmission, 18in wheels, electric leather seats, and front and rear park assist. All XE models are available with either rear or all-wheel drive (AWD), although both cars I drove were rear-wheel drive.

A dynamic mode is standard across the range; selecting the mode sharpens up the throttle response, increases the steering weight and speeds up the gearchanges.

Unsurprisingly, the petrol-engined car felt far more sporty, with a noticeable eagerness that was apparent within moments of switching cars. The quickest XE is the P300 with AWD, which will hit 60mph from rest in 5.4 seconds, although the less powerful car I tried didn't disappoint in the way it dispatched the miles.

Together with the new 'assertive' exterior, improved interior and simplified engine and model lineup, Jaguar has one more ace up its sleeve. The new cars are also cheaper than the equivalent previous models - for example, the D180 R-Dynamic S is £670 less than the outgoing XE R-Sport, plus there's now around £1,100 of added equipment, making a total saving of well over £1,700. 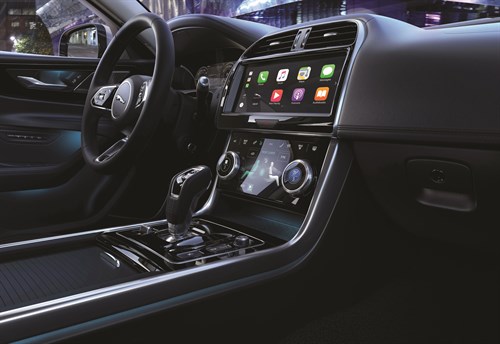