Skiing uphill is usually hard to do. Unless you are holding a rope affixed to the shapely rear end of a XF Sportbrake travelling at speed up a snowy piste. Why am I doing this? Because earlier this year Jaguar invited Business Car to recreate the 117mph Guinness World Record for 'fastest towed speed on skis' hard-won last autumn by British skier Graham Bell and a XF Sportbrake as the tow vehicle - but at a considerably lower speed.

Daft stunt aside, once you get past the feeling of clinging on for dear life, it is a great place to follow the curves of one of the most elegant executive estates around, while also noting how its all-wheel drive skills keep the car on the straight and narrow.

Recent XF Sportbrake changes include a special edition 300 Sport model featuring various visual enhancements, including dark satin wheel and side vent finishes outside, and sporty contrast yellow stitching inside (and if you can't get that limited edition model before it sells out, there is a Chequered Flag model with a similar aesthetic too). The 300 Sport model can be powered by either a 300hp 2.0-litre petrol or 300hp 3.0-litre V6 diesel in all-wheel drive, in addition to the 163, 180 and 240hp 2.0-litre diesels and 250hp petrol in both rear-wheel and all-wheel drive available with other equipment grades. 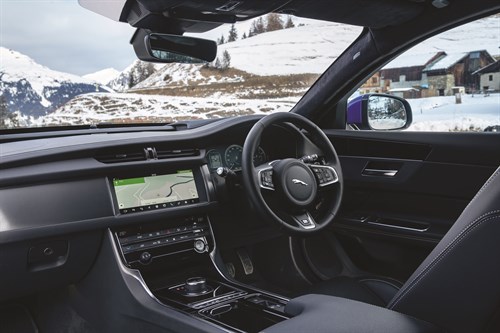 The 163 and 180hp diesels in that list are of particular note, as they are the first premium model engines by any carmaker to be Real Driving Emissions Step 2-compliant (RDE2), meaning company car drivers that choose one will no longer be liable for the 4% BIK supplement imposed on non-compliant diesels. The only other diesel cars Business Car has heard of that will be RDE2-compliant in the near future are a couple of forthcoming Mercedes A-Class derivatives and the 2020 model-year VW Passat, as well as Jaguar's facelifted 2020 model year XE. So Jaguar is ahead of the game on this increasingly important issue.

The 300hp petrol we drove - which is also found in the F-Type - can't match those RDE2 engines for tax breaks, but it does a different job by giving the XF Sportbrake a foothold in the top-end petrol niche of the market. This model still offers strong-for-segment economy and emissions (36.2mpg and 175g/km CO2, respectively), which betters its 340hp BMW 540i xDrive rival by some margin (29.4mpg and 180g/km). So unless your fleet drivers do five-figure annual mileages, in which case the better economy of the also excellent 300hp TDV6 diesel (46.3mpg and 160g/km CO2) could appeal, the 300hp petrol could be a better bet. It is quicker, smoother, quieter and more refined than its similarly powered diesel counterpart and, mated to the eight-speed automatic, it is a joy to drive with spirit or simply when motorway cruising.

Sitting inside the XF Sportbrake - rather than getting pulled along behind one - is of course the best place to appreciate the car's composed handling, which for such a long (4,995mm) and wide (1,987mm) vehicle, are confidence-inspiring, especially when traversing narrow and icy Alpine passes. The ride, as we have come to expect from Jaguar, is excellent - no over-stiff suspension here.

The estate's luggage space is generous too, swelling from 565 litres with rear seats up to 1,700 litres with seats down, and is well designed with it. The load floor is flush to the rear load lip and smooth side walls have no wheel arch intrusions. 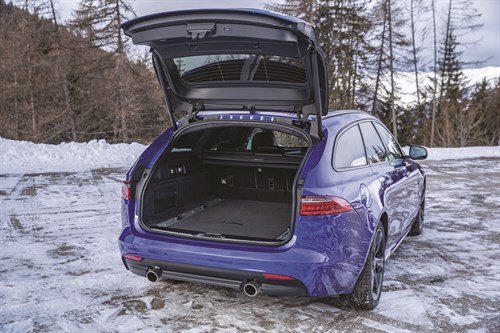 Further enhancements to the new 300 Sport model include a cabin air purification system for the first time and a standard 10in centre touchscreen. The latter is better than the smaller, older version, but is sometimes slow to respond and still not class-leading. But add in tow assist stability control, self-levelling rear air suspension to adapt to heavier loads on board, plus those ground-breaking RDE2-compliant smaller diesel engines, and the new XF Sportbrake offers even more reasons for consideration. There's little else out there that is as elegant, practical and tax-efficient.