It is almost two years since we had the chance to drive the latest version of the Picanto, but there were a number of additions to the range in 2018.

The X-Line adds a more rugged styling kit and raised suspension, giving Kia a rival to the Suzuki Ignis and Ford Ka+ Active, while a new range-topping engine has been added to the line-up. The new engine is a turbocharged version of the three-cylinder 1.0-litre unit, and is found in other Kia models. Producing 100hp, it has the potential for zippier performance around town as well as greater confidence when overtaking.

It also becomes the only engine available in the Picanto's GT-Line and GT-Line S equipment grades, with earlier 1.2-litre models now only available in other grades.

Firstly, it is easy to forget what a fundamentally great-looking small car the Picanto is. It is easy to allow these A-sector cars to fall into the 'white goods' category of styling (purely functional and bland), such as the Suzuki Celerio or Mitsubishi Mirage, or to follow a more 'cutesy' look like the Fiat 500 and Suzuki Ignis. 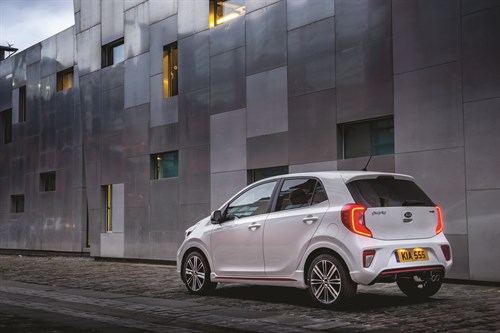 The Picanto has a lot of characterful looks, with its LED daytime running light signature, sharp lines and wheel-at-each-corner stance. The GT-Line styling kit features contrasting colours around air intakes at the front and on the radiator grille, as well as on the side skirts.

The white body colour and contrasting red trim of our test car is a popular colour scheme that has been adopted by a number of manufacturers for their smallest cars, but the Picanto is one of the very few that packs a power boost to back it up.

It might be a small-capacity engine, but the turbo lands its punch early in the rev range and peak torque is delivered from 1,500rpm. The Picanto 1.0 T-GDi's 0-62mph sprint time is comfortably lower than 10 seconds. It feels even quicker, thanks to the
low-down boost, and the Picanto's acceleration, with its diminutive size, is at risk of taking other road-users by surprise. 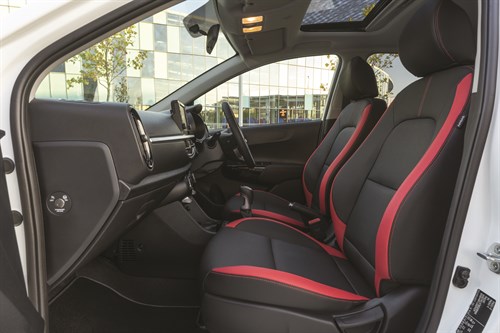 The main disappointment - apart from the inherent harshness of the three-cylinder engine, common to most units in this configuration - is the real-world fuel economy.

The WLTP combined cycle fuel economy figure is 55.4mpg, but we think most drivers will struggle to better 45mpg based on our trips. For now, the NEDC-correlated CO2 emissions are a respectable 117g/km, but we think this engine, and similar small turbocharged petrol engines from other manufacturers will show emissions figures significantly worse when they are measured and reported under WLTP from April 2020.

The GT-Line S equipment levels on our car are pretty impressive, but if you choose the GT-Line without the S extras, you will only be missing out on integrated sat-nav (otherwise available via smartphone apps through Apple Carplay or Android Auto), heated front seats, a heated steering wheel, and a few very minor trim differences. 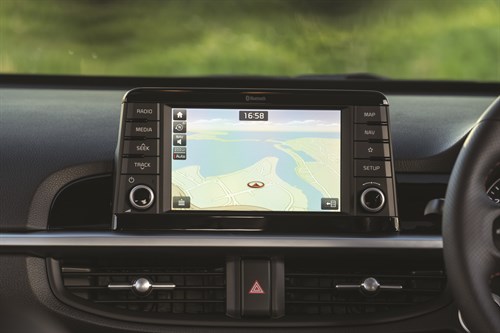 The Picanto 1.0 T-GDi is a very impressive package as a well-equipped small car, with enough performance to make it an appealing choice for entry-level company car users, and real-world fuel consumption aside, frugal for fleet operators.