The flagship GT model sits atop the Proceed range with sharp looks and punchy performance.

Kia has sold more than 1.3 million examples of its lower-medium Ceed across Europe since the original model's introduction in 2006, and the Proceed represents its second attempt at a more distinguished and eye-catching alternative to the run-of-the-mill hatchback.

Formerly known as the Pro_Cee'd - it is pronounced the same as the current version but, mercifully, the punctuation has been ditched - the original took the form of a three-door coupe and was among the company's first forays into cars with a little more panache. It was a handsome thing, although more style than substance, as it was neither thrilling to drive nor a monumental seller and, by Kia's own admission, the European market for three-door hatchbacks is drying up.

The latest version has stuck with the theme of stylish hatchback offshoot, but instead of losing a pair of doors, it has grown into a natty compact estate car. It definitely looks the part, especially from the rear; a sleek shooting brake makes a great left-field alternative to the established norm of lower medium hatchbacks and compact SUVs, and it also plays the practicality trump card with a 594-litre boot.

Kia has limited the Proceed to higher grades to give it a degree of exclusivity from the conventional Ceed, and it is available in GT Line, GT Line S and GT guises. The latter sports a bodykit - souped-up grille, splitter, side skirts, etc - and sits atop the range as the fastest and most powerful model, which is the one we tested here. 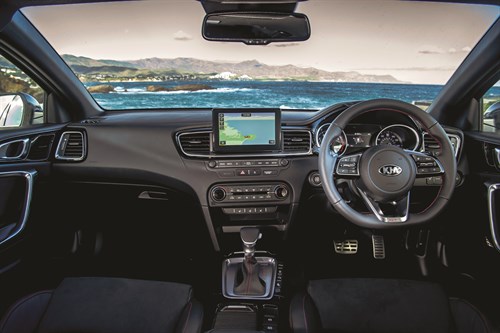 It is fitted with a turbocharged, 204hp, 1.6-litre petrol engine, gets a seven-speed automatic transmission as standard and is good for 0-62mph in 7.2 seconds. Its highlight is the springy and sensitive throttle, which kicks in instantly, regardless of speed.

Less appealing is the gravelly exhaust note - it just sounds gruff and over-engineered - but it is only really obvious under acceleration and dies down if you maintain a consistent pace. Tyre noise is also louder than average, courtesy of the 18in alloy wheels and low-profile rubber, so refinement isn't the Proceed's strongest suit.

The interior is decorated with a similar suite of hot hatch-style features, such as half leather/faux suede sports seats and GT branding, but it is the more practical side of things in which the Kia excels. The boot has been well thought out; yes, it is large for the size of car, but if you lift up the floor of the main luggage area you will find two neat compartments in which to tuck smaller items to prevent them from rolling around. More spacious estates are available - if that is your main requirement then just get a Skoda Superb - but there is enough rear leg and headroom to satisfy the majority. 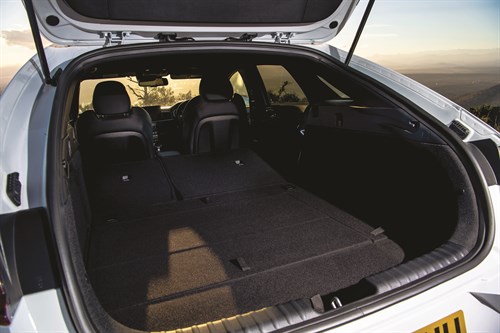 The Proceed's Achilles' heel, in practicality terms, is the sharp angle of the tailgate. Lovely though that ski-jump angle looks from the outside, it means you are going to have a job loading big, squared-off items. That, and the shape and size of the glass, make for terrible rear visibility.

Performance specials never generate the best running costs and the GT manages an official 39.3mpg and CO2 emissions of 142g/km, which isn't bad considering its power and that those are WLTP figures. Factor in the diesel tax weighting, and the top-end petrol model only ends up two percentage points higher (29%) than the 136hp diesel equivalent (27%) in BIK terms - so unless you really need a diesel for motorway work, this one is worth a look.

As is usually the case, fleets can find better value - and especially RVs - if they look to the centre of the range rather than the top. The £24-£25,000 region occupied by such models equals a better balance of price and acceptable spec than the full-fat GT's starting point of £28,690.

It will never be the biggest-selling Ceed for more than just that reason, but there is plenty of bang for your buck, it is stylish to boot and, as with all flagship models, it serves its core purpose of elevating the range.