The new Kia Proceed has developed into a sleek shooting brake estate, but is the 1.6 diesel the new leader of the pack?

After being christened the Pro_cee'd at its original launch, Kia has had a nominative change of heart. Still sticking to unusual naming conventions though, it has removed the uncomfortable punctuation and renamed its latest model the Proceed.

Unlike its predecessor, which was a compact three-door, the Proceed now wears five doors and a shooting brake tourer bodystyle. It differentiates itself from the similar Sportswagon with a curvy, fastback rear that places a greater emphasis on style rather than practicality.

Aesthetic influences are perhaps surprising given Kia is firmly in the mainstream. It bears a likeness to the Porsche Panamera Sport Turismo and the Mercedes-Benz CLS Shooting Brake - certainly not bad cars to share a likeness with given the sector of the market the Proceed competes in. 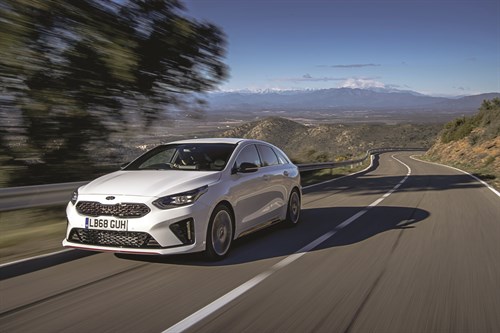 Kia says it wants to bring something different to the C-segment with the Proceed, with on-the-road prices starting at just under £24,000 for the six-speed manual gearbox version; the diesel costs £850 more. Replacing the manual transmission with a seven-speed auto adds another £1,100 to the bill. However, there isn't really an 'entry-level' version, as the Proceed is only available in Kia's top three equipment grades - a move that helps separate it from standard Ceed Sportswagon variants. Alongside these GT-Line and GT-Line S equipment levels, comes the GT variant - but can Kia turn buyers' heads away from their sensible hatches?

The Proceed is longer and lower than both the Ceed five-door hatch and Sportswagon. Like the Ceed, the Proceed has those familiar 'ice cube' daytime running lights as standard, and shares other design cues with earlier GT-Line and GT models. Where the Ceed Sportswagon majors on practicality alone, the Proceed manages to combine interesting design with that same instinct for utility.

With a lower roofline than the Sportswagon estate, Kia has also lowered the Proceed's rear seats so that it doesn't impact on headroom. The major downside to that sleek shape is the small proportions of the rear window: visibility is compromised. 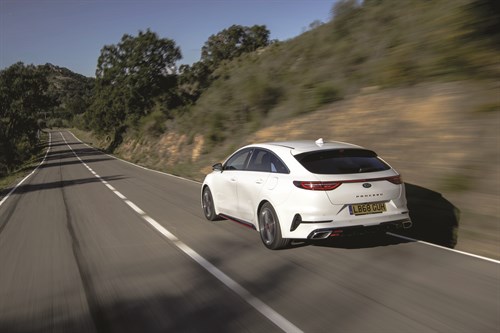 Inside the cabin, the Proceed is very much like the Ceed and the materials feel high-end for a car with a mainstream badge. It also introduces sportier styling elements, including black cloth for the roof lining instead of the grey on the Ceed hatch and Sportswagon. There are also new metal steering wheel paddles for models equipped with the auto transmission.

The engine line-up consists of two petrols and one diesel engine, depending on the model. Petrols include a 140hp 1.4-litre T-GDi power unit, which comes with six-speed manual transmission as standard and the seven-speed auto DCT as optional. Emissions start from 130g/km and fuel performance is 45.6mpg.

The list is rounded out with the 1.6-litre 204hp turbo petrol and the 1.6-litre turbodiesel. The 1.4 is the predicted bestseller, and petrol versions come with the DCT semi-auto gearbox only. Diesel buyers can opt for DCT or manual. 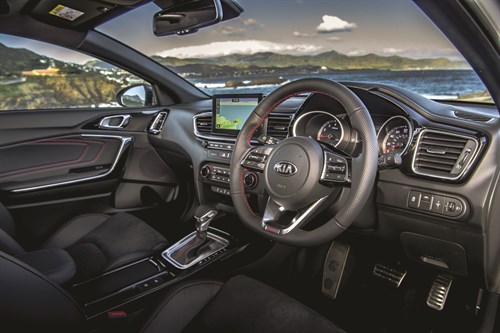 The diesel we are driving here is an all-new 136hp 1.6-litre CRDi engine - the first diesel developed as part of Kia's new Smartstream powertrain philosophy, which seeks to enhance fuel efficiency and performance with reduced emissions. We drove the auto, but it can be paired with a six-speed manual or seven-speed auto DCT, with emissions starting from
110g/km and fuel efficiency reaching 65.7mpg, putting it in the 27% BIK band.

We discovered at the launch that the 1.4-litre petrol engine occasionally struggles to deliver the performance implied by the Proceed's racy looks, even proving a little thrashy when stretched too far, so we recommend you choose the 1.6 diesel if you want more relaxed and authoritative performance, as well as far better miles per gallon and lower CO2.

The boot's capacity is 594 litres and, without any boot lip obstruction, is easy to load. The GT-Line S grade includes 40:20:40 split-fold rear seats, which aren't too fiddly and can easily be folded with a lever; on the GT-Line and GT you get a 60:40 split.

Once under way, refinement is the first thing that you will notice on the classy cruiser, with little road or wind noise detectable. The ride feels like you are driving something far more expensive, with just a rare slip into harshness - but all is forgiven when you are gliding down open roads.

Shooting brake-style 'coupe-estates' have been restricted to the premium sector for years, so it is great to see Kia bringing one to the affordable family car arena, albeit in a luxury guise.

It is surprisingly practical, constitutes good value for money compared to premium rivals, drives well and offers an upmarket experience. If you have had your fill of family hatches, you don't need to opt for an SUV - Kia has everything you need right here.