The third-generation Kia Soul will only sell as an EV in Europe - but early impressions suggest that is fine.

If the Kia Niro, in its various powertrain incarnations, was meant to demonstrate people could go green while retaining a low profile, then the Soul EV will offer something rather different.

While some other regions of the world will take petrol versions of the Soul, Europe will only offer the electric variant, and in the UK, the 204hp 64kWh battery pack, as found in the E-Niro, with a similar 282-mile range on a full charge.

The Soul has never been a car for shrinking violets, with its bold styling and quirky details, and the latest model continues in the same vein, although with a slightly more upmarket feel than before.

At the front, the headlights (full LED as standard), are slim and divided into two parts: one on the edge of the bonnet and the other embedded in the bumpers.

The grille typical of the other Kia, with its 'tiger nose' motif, assumes very minimal proportions, concealing the charging connector, which allows the batteries to be recharged either with single-phase AC charging or DC fast-charging systems.

In profile, the new Soul remains faithful to the original, with the possibility of
two-tone paint, a new design of five-spoke 17in alloy wheels. The rear lights create a distinctive boomerang design around the tailgate.

The interiors reflect the young spirit that has always characterised the Kia Soul. There is a new digital instrumentation plus a 7in colour screen between the dials.

It shows the eco guide, energy recovery and the power currently in use.
The main update is the enormous 10.25in horizontal touch screen multimedia system which now allows split view in three parts, letting the driver choose their preferred display. 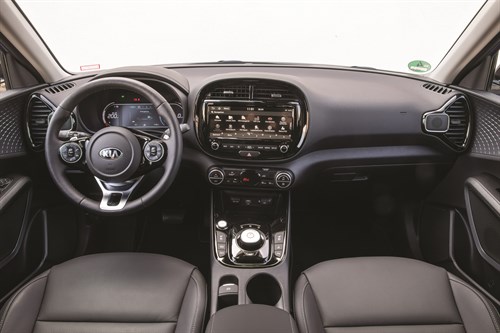 The automatic climate control, on the other hand, remains single-zone.

There are details that will appeal to younger drivers, such as the LED ambient mood light with a choice of eight colours and six themes, the Harman/Kardon hi-fi system and the possibility of connecting two smartphones via Bluetooth.

The interiors might look more upmarket at first glance, but the quality of the materials isn't as good as in other Kia models such as the Sportage or the Proceed. Door panels are made of hard plastics, despite blingy details. At 315 litres, boot space is barely any larger than a small hatchback.

With 204hp and 291lb-ft of torque, the Soul EV is rapid under acceleration. Drivers can select the level of energy regeneration through the paddles that would be used to change gears in a conventional car.

The Soul EV offers 'one pedal' driving capability on the highest regeneration setting, meaning that when the accelerator is released, the car will activate the maximum energy recovery, giving the sensation of gentle braking and allowing you to recharge batteries too. It should also reduce wear on the brake pads. 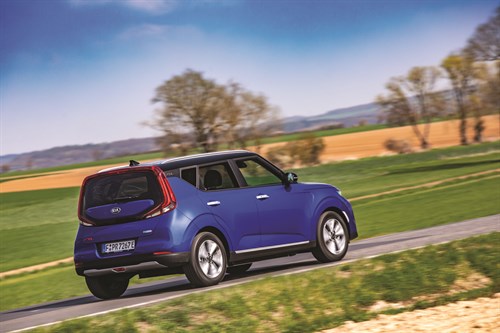 Predictive Energy Control operates based on traffic detected ahead, and suggests the optimum level of acceleration without wasting any by needing to brake later.

Prices for the Soul EV are expected to be similar to that of the E-Niro, so expect around £37,000 when the car arrives at the end of 2019. It might be smaller than the E-Niro, and less practical, but it has more personality.

The battery pack warranty is seven years/100,000 miles and Kia promises to replace them if they don't keep more than 70% of their original capacity during that period.

While there have been issues with long lead times for many EVs, Kia hopes that by the time the cars reach the UK in late 2019 and in 2020, battery production will have increased to reduce bottlenecks.