Lexus is entering a new sector with the UX, using a new platform with a new hybrid engine. Is it a winner?

In its early years in the UK, it is fair to say Lexus was being held back because it didn't offer diesel versions of its cars.

Now, with a range dominated by hybrid variants, it has been a struggle for the brand to sell as much as it would like to because of demand for hybrid components.

According to its UK director, Ewan Shepherd, the brand registered 12,500 cars last year, and could have sold 1,000 more had vehicles been readily available.

Nonetheless, Lexus launches what could become its bestseller this month, taking its UK sales toward 20,000 units by 2021.

The UX is a compact SUV, with dimensions to rival the Audi Q3, BMW X1, Jaguar E-Pace and Volvo XC40, and despite entering a crowded sector, Lexus believes it could sell 6,000 in a full year, and is confident of reaching almost 4,000 units for the rest of 2019.

Lexus believes the best opportunity for growth with the UX is among user-choosers and SMEs, and looks aside, while it sits comfortably in the template for a premium SUV, its hybrid powertrain is a compelling weapon with which to attack diesel rivals.

No other premium rival currently offers a full hybrid variant (or self-charging hybrid, as Toyota and Lexus like to call them), and while it can offer fuel economy to rival the best diesels, its tax position is even more attractive.

CO2 emissions are already lower than any diesel car in this class - starting at 94g/km for front-wheel drive variants - and we expect the UX 250h to retain its advantage when they are measured at the higher WLTP protocols from April 2020. 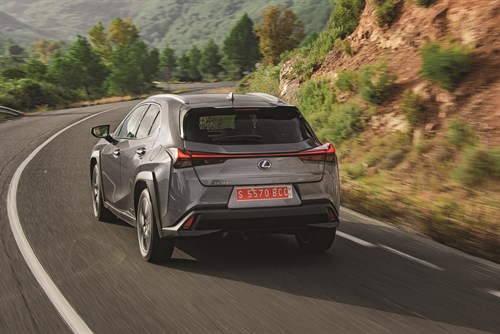 For example, against the similarly priced BMW X1 sDrive 2.0-litre diesel M Sport automatic, the BIK tax bill will be more than £100 lower in the UX.

There are similar advantages compared with other diesel rivals, and for now at least, no direct plug-in hybrid rivals for the UX - although let's face it, far too many company car drivers have been using these purely to minimise tax liability and haven't charged them often enough to deliver the true low-emission benefits.

At least with a conventional hybrid (I think we can call them conventional after almost 20 years on the market), the fuel and emissions reductions are deliverable throughout a long journey.

So, on paper at least, the Lexus looks like a convincing winner against diesel rivals, producing between 150 and 190hp. It also seems very well equipped, with Lexus's suite of safety features fitted as standard, as well as LED headlights, sat-nav and a rear-view camera for reversing.

The interior of the UX is extremely well finished, with materials quality as high as anything else for the money, and for the most part clearly designed. The only exception is the media interface, which will probably take anyone unfamiliar with a modern Lexus a few days living with the car to master. 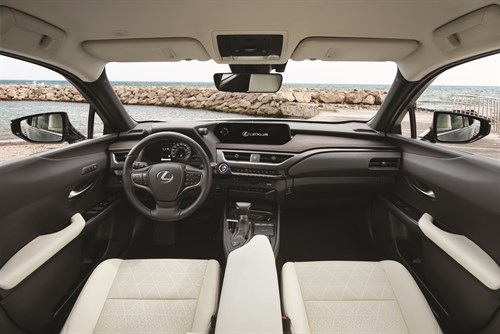 The boot is smaller than expected, and if you go for an all-wheel drive version, even more luggage space is sacrificed, but Lexus would argue luggage space isn't a priority for people choosing cars in this sector, with design and technology taking priority. However, we think anyone expecting to use the UX as a family car might be a little disappointed in this.

Performance is strong, with the electric motor delivering useful assistance under acceleration, and the UX feels quiet and refined, unless you are trying to extract maximum acceleration when the revs soar briefly before settling down again, thanks to the characteristics of the CVT auto.

Ride comfort is also excellent, even over bumps, which is not the easiest trick to pull off for a relatively compact car when drivers will be tempted to choose large wheels.

The structure of the UX is extremely stiff, which, as well as making it safe in a crash, also allows engineers to create a more supple ride without sacrificing the car's handling.

The UX arrives at an opportune moment for Lexus as the appetite for alternative-fuel cars is increasing and the SUV market continues to grow. Despite its few flaws, we don't doubt the UX will achieve the company's sales ambitions.