Mazda's lower-medium contender gets an innovative new engine and a bigger boot.

We are used to car powertrain innovation in 2019 being all about electric motors, but Mazda is one company that isn't done with internal combustion yet. It says its new Skyactiv-X engine - a 2.0-litre, 180hp petrol - is the world's first production petrol motor to use a diesel-style compression injection system, which it claims combines the free-revving nature of a traditional petrol with the initial responsiveness of a diesel, with added efficiency benefits (helped by a mild hybrid system).

Its UK debut comes in the Mazda3 lower-medium car, and its launch also allows us to sample the saloon bodystyle, which is also new to that range, joining the hatch that arrived earlier this year. Lower-medium saloons are a niche proposition, and Mazda expects them to account for less than 10% of Mazda3 sales, but it reckons market interest could be driven by premium-badged contemporaries - and that Mazda6 drivers might downsize for the Skyactiv-X engine. Said engine is the only one the saloon is available with, a diesel option having bit the dust when Mazda unexpectedly dropped that engine from the 3 range just a few months after launch, blaming low customer demand. The hatch can still be chosen with the 2.0-litre, 122hp Skyactiv-G petrol (also a mild hybrid) as an alternative.

Go with the changes

For drivers, the key thing to remember about the Skyactiv-X is that it isn't a diesel. It might have the same compression technology, and it does sound a bit like a diesel at low speeds, but try to drive it like one, riding waves of low-down torque, and you will be disappointed, as it isn't quite there. At first, therefore, it can seem a bit lethargic, and you wonder where the engine's 180hp has got to. Then you remember it is not a diesel and peak torque doesn't arrive until 3,000rpm, and the thing to do is utilise Mazda's joyously slick manual gearshift and change down. Do this and you unlock a fair amount of shove, and suddenly the quoted performance feels achievable after all (exit a 30mph zone in second and it can briskly propel you forwards). 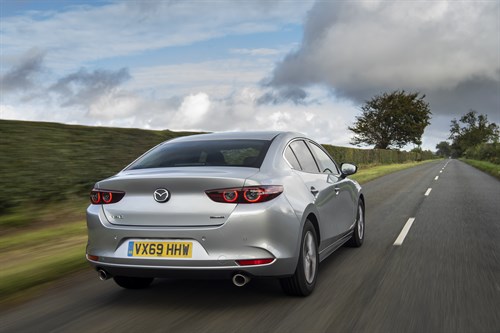 Of course, driving like this regularly will send fuel bills soaring, but keeping the revs up along a favourite back road will produce a driving experience to rival some hot hatches. This is thanks to a superbly resolved chassis (the saloon is mechanically identical to the hatch and a few kilos lighter), which is firm enough to keep things flat and pointy in the bends but brilliantly supple, along with crisp steering and the aforementioned gearbox (though an auto is also available).

So, used wisely, the Skyactiv-X should be OK for drivers - although regular motorway users may still miss a diesel's torque - and they will also appreciate its tax benefits. Its official CO2 emissions figure of 102g/km is excellent for a petrol, and also comes a full five BIK bands below the now discontinued diesel due to the 4% diesel BIK surcharge that incurred.

A 50.4mpg combined fuel economy figure stacks up well against petrol rivals too, although it is around 6mpg worse than the diesel was, so while there is also a CO2-based national insurance saving, employers can expect to be worse off overall once fuel receipts start rolling in.

So, that is the Skyactiv-X covered - what about the car we drove it in? Well, as mentioned earlier, the saloon is mechanically identical to the hatch, but visually only the bonnet and windscreen are carried over. For us, while it is handsome enough, some of the striking appeal of the hatch has been lost. Where the saloon regains ground is a bigger boot - 444 litres versus 351 litres in the hatch, although the saloon's boot opening is a bit tight. The passenger compartment is unchanged (except for an imperceptible few millimetres of extra rear shoulder room), but while this means it is not the most spacious interior it does also mean high-quality materials, attractive design and impressive infotainment. It will be well-equipped too, since the saloon isn't available with the lowest equipment grades from the hatch range. 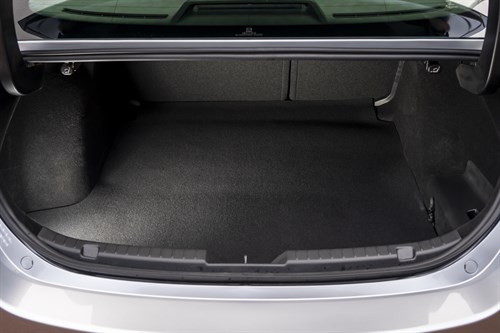 Compared with the hatch, the saloon is actually slightly more economical, which combined with slightly better expected residual values means it should be just under a penny a mile cheaper to run, while P11D values are the same. For company car drivers who are prepared to sacrifice the style of the hatch and are happy with the saloon's boot, it could be the best choice.

However, whichever bodystyle they prefer, the Skyactiv-X's CO2 figure will likely propel the already-appealing 3 up many drivers' wish lists.