The hottest version of the new A-Class to date is now on sale. Do the figures stack up as a company car?

Lower-medium hatchbacks are at the heart of the fleet sector. Good all-rounders with typically low operating costs, even in this era of the SUV, they are probably more common on fleets than any other type of car.

Of course, there have been 'hot hatches' for almost as long as hatchbacks have been part of the mainstream, but is there justification for fleets to consider a potentially higher-cost, high-performance variant as an option?

The latest Mercedes-Benz A-Class already had great user-chooser appeal from its core petrol and diesel models, but it is now available after undergoing the AMG treatment, and also becomes the new entry model on the AMG ladder.

The new A 35 AMG 4Matic has less power than the A 45 AMG available in the previous A-Class line-up (presumably to allow for an even hotter version later), but it shouldn't be regarded as the poor relation. 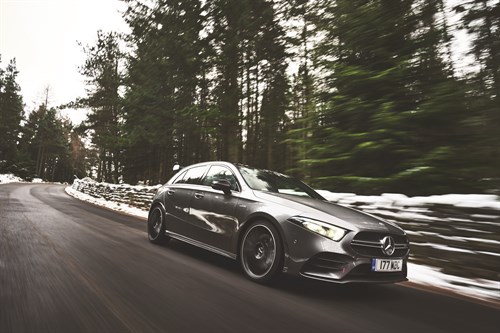 With equivalent performance to models such as the Audi S3 and Volkswagen Golf R, the A 35 produces 306hp from its turbocharged 2.0-litre engine.

It comes with a seven-speed dual-clutch automatic transmission (with manual mode) as standard, as well as all-wheel drive. The extra traction from the rear wheels could be important in allowing it to set a 0-62mph sprint time of 4.7 seconds.

That performance doesn't come cheap, but, at around £35,000, it is not that far north of mainstream hot hatch territory. 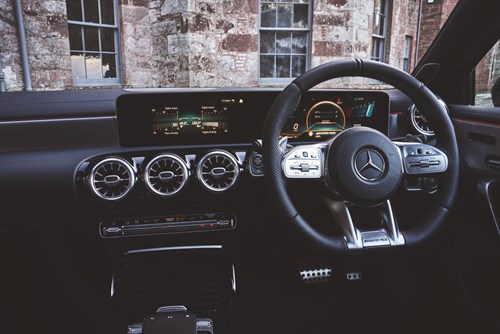 The Premium line uses a 10.25in configurable digital instrument display, upgraded audio, a rear armrest, and keyless locking and unlocking.

You have to pay extra for smartphone integration (£495) as part of the advanced connectivity pack, which also comes with wireless phone charging for
compatible devices.

The driver assistance package adds a range of safety features for £1,695, while Mercedes-Benz also offers an upgraded navigation package (including a head-up display) and a style package, with an imposing roof-mounted rear wing.

Despite all the performance, the A 35 could be any other A-Class model around town. It doesn't make too much noise, the transmission allows smooth progress, and controls are light in order to make manoeuvres easy.

Out on the open road, the A 35 transforms into a rapid machine, with tenacious grip on corners and a keenness to press on as hard as you want it to. It is not quite a Jekyll and Hyde character, but it certainly had more to give than I was prepared to exploit on twisting roads in the Scottish Highlands.

Given that the overall running costs are lower than some diesel C-Class models, for organisations where perks are important and staff retention is sometimes an issue, the A 35 could be a valuable tool in slowing down staff turnover - as well as allowing the driver to say that they drive an AMG. 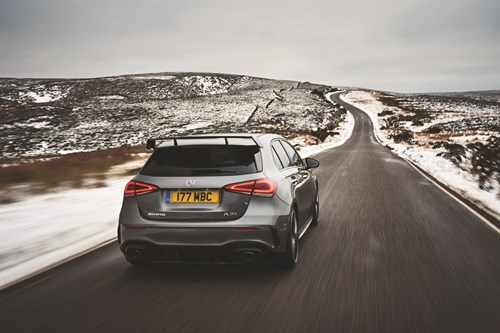