MPVs may be rapidly disappearing from mainstream manufacturers' ranges, but the same isn't quite true yet for the premium brands. Hence we have a new Mercedes-Benz B-Class, ready to take on the facelifted BMW 2 Series Active Tourer, which arrived last year. Much of the on-board technology and underpinnings of the B-Class are shared with the A-Class lower-medium car, but that should be no bad thing since that model has been a big sales success since launching last year.

However, from a fleet perspective potentially the most attractive feature the B-Class shares with the A-Class is a choice of two 2.0-litre diesel engines that meet the new RDE2 emissions standard, meaning they avoid the 4% BIK surcharge otherwise applied to diesel company cars. There is a 150hp unit or the 190hp version tested here (a non-RDE2-compliant 116hp diesel and four petrols fill out the range). The chance to return to the days of diesel fuel economy without an accompanying kicking from HMRC has to be an appealing prospect for many drivers - but does the B-Class stack up as an overall package? 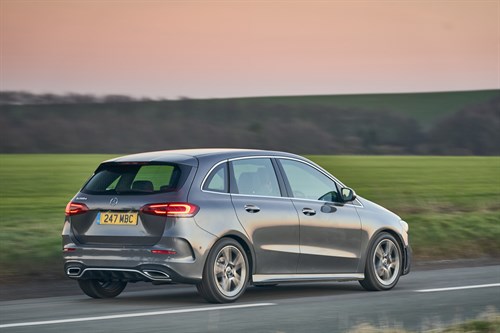 Well, the aforementioned engine certainly doesn't sacrifice performance in the name of cleanliness. There is enough shove to accelerate from 0-62mph in just over seven seconds, which, if anything, feels a bit like overkill given the B-Class's likely user requirements. (although the 150hp version, while cheaper to buy, doesn't offer any fuel economy or BIK tax savings). It is mated to an eight-speed automatic gearbox, which works well most of the time, though it sometimes feels a bit jerky in traffic.

The ride is also on the firm side at urban speeds, although it flows nicely once the pace is picked up. Do that and you will also find the B-Class is surprisingly good to drive - it feels responsive and agile in corners, with limited body lean and accurate steering. A bit of wind noise does creep in at pace, however.

One thing the B-Class does address well is any fears that opting for an MPV means dowdy exterior styling. Its sleek proportions make it look closer to a hatchback than a people carrier, and it is noticeably lower than other MPVs in the office car park - especially with the lowered suspension standard with the AMG Line equipment grade. Of course, this would be no good if it compromised practicality, but there is plenty of front and rear headroom, even with the optional sunroof, although only space on-board for five, with no seven-seater option.

The low-lipped boot is easy to load, and while its capacity with diesel B-Classes is 10 litres less than with the petrols (due to the need to accommodate an Adblue tank), this isn't going to be noticeable day-to-day, though it is fractionally down on the BMW. 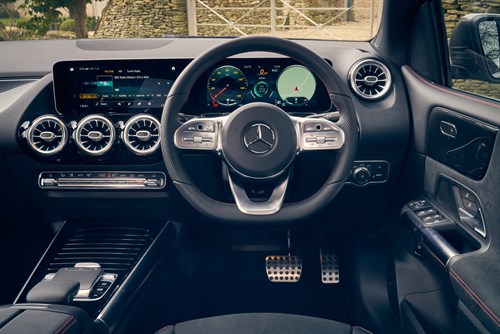 The interior is stylishly designed, and the level of fit and finish is good, as is the quality of most materials, though some cheaper-feeling plastics do appear lower down on the doors, dashboard and glovebox. The eye-catching MBUX infotainment system is a feature carried over from the A-Class, featuring an impressive pair of smoothly operating, graphically vivid screens (between 7in and 10.25in depending on spec), and a wide array of touch, scrolling and voice control options, of which drivers should find at least one that works for them.

Something else that will work for drivers is the cost sheet. Compared with the equivalent Active Tourer, the B-Class is not only slightly better on fuel economy and cost per mile, but that RDE2-compliant engine means a 4% BIK reduction, equal to a £30-per-month saving for a 20% taxpayer - a potentially decisive factor. We are going to see more and more of these engines coming on the market over the next few months, but for the time being at least, being a pioneer in this area gives the B-Class a potentially crucial fleet advantage.