Is a rarely-seen diesel plug-in hybrid powertrain a good fit for Mercedes' exec?

For fleet managers beset on one side by the seemingly endless demonisation of diesel cars, and on the other by warnings of non-charging plug-in hybrid drivers accruing massive fuel bills, the idea of a diesel plug-in hybrid might sound like the ultimate nightmare. But that hasn't stopped Mercedes-Benz giving us the car seen here.

Badged the E 300de, it is an E-Class executive saloon (an estate is also available) that pairs a 194hp diesel engine with a 122hp electric motor. When they are running together a maximum output of 306hp is on offer, while a 13.5kWh battery offers a claimed all-electric range of 31 miles.

Various driving modes are available, including one which is specifically battery-only, but even in regular hybrid mode it is surprising how much the E 300de will run on the battery alone rather than calling on the diesel engine. Although the electric motor's 122hp might not sound like much in a car that weighs more than two tonnes, it is perfectly adequate around town, and even enough for motorway cruising if required, meaning short-distance electric-only commuting should be possible whatever sorts of roads are involved. And of course, running silently on the motor only enhances the high level of refinement you would expect anyway from a big Merc, suiting the character of the car perfectly. 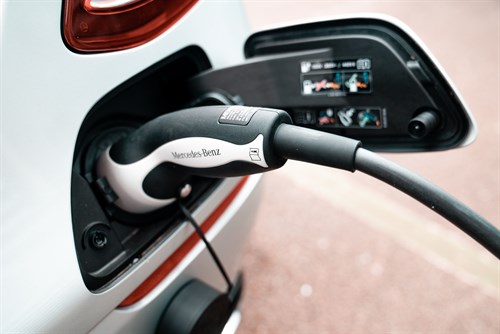 When you do need the diesel engine it comes in smoothly - and at low speeds almost unnoticeably - and while it is a bit noisier under hard acceleration than you would expect from an equivalent petrol, it is at least mounted to a responsive and smooth-shifting nine-speed automatic gearbox. And with all guns blazing the 300de certainly doesn't lack performance - 0-62mph is possible in less than six seconds.

The extra weight of the plug-in hybrid powertrain makes the E 300de around 300kg heavier than a conventionally engined E-Class, but this doesn't unduly affect its driving dynamics. On a twisty road it never feels like anything other than a very assured, controlled way of making progress, with the extra weight only really becoming noticeable under braking.

Comfort is generally good, but the ride is disturbed a bit more than you might expect by road surface imperfections around town.

The E 300de's interior is familiar from the regular E Class, which has been with us in its current form since 2016. But this is no bad thing - you would be searching for a long time before you found any materials that were lacking in quality, or any weaknesses in fit and finish. 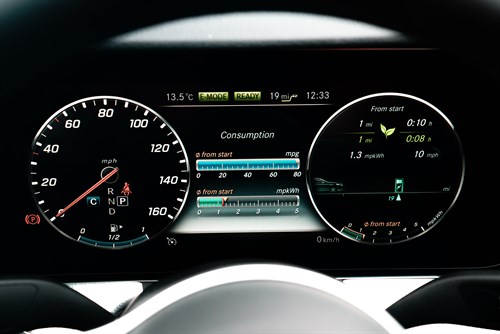 There is also a familiar dominant aesthetic feature in the shape of two 12.3in screens - one for multimedia functions in the centre of the dashboard, and the other a driver information display. The central screen can be operated by touchpad, rotary controller or steering wheel-mounted controls - we find the latter easiest - but it isn't a touchscreen, and while the other control methods would be preferable while driving anyway this does make it a bit more time consuming to do things like programme the sat-nav while stationary.

One area where the E 300de does lose out to the regular range is on luggage space - the need to accommodate the hybrid battery means a stepped boot floor, reducing capacity from 540 to 400 litres.

The E 300de delivers the sort of impressive company car savings you would expect from a plug-in hybrid - with the usual warning that drivers must plug in regularly to get the best from it. Do this, and an official WLTP figure of 188.3mpg could be within reach, or even bettered if commuting on the battery alone. And CO2 emissions of 41g/km mean a BIK rate of just 16% (there is no 4% surcharge for diesel hybrids). 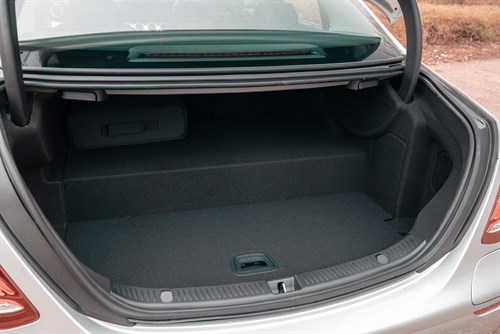 It is worth mentioning at this point that Mercedes does also offer a petrol plug-in hybrid E-Class, pairing the same electric motor with a 211hp petrol engine. However, this has an official fuel economy of only (!) 141.3mpg, while CO2 emissions are the same. For that reason, for those whose mileage suits, the E 300de might just be the smart choice after all.