The GLC benefits from the latest technology and engine updates in a mid-life refresh.

More than 20,000 GLCs found homes in the UK last year, and Mercedes-Benz has updated it with a new range of engines. On sale now, with deliveries late summer, the GLC will initially be offered with two RDE2-compliant diesel engines - the GLC 220d and GLC 300d replacing the GLC 250d and GLC 350d. Later in the model cycle Mercedes-Benz will also add the GLC 300, it coming with a four-cylinder petrol engine and benefitting from EQ boost, Mercedes-Benz's mild hybrid based around 48V electronic architecture.

Don't expect a radical new look outside, Mercedes-Benz's designers erring on the side of caution for the GLC's mid-life upgrades. There are some new headlights and taillights if you are really looking, the bumpers also being slightly re-styled. If it is blink and you'll miss it outside, then the interior changes are a bit more obvious.

The interior gets Mercedes-Benz's latest MBUX (that is Mercedes-Benz User Experience), which comes in every model from the base Sport in the GLC 220d -the 300d here only offered with AMG Line Premium and upwards. Most obviously, there is a 10.25in touchscreen in the centre of the dash, complemented by a 12.3in digital screen situated where you might once have found conventional instrumentation. 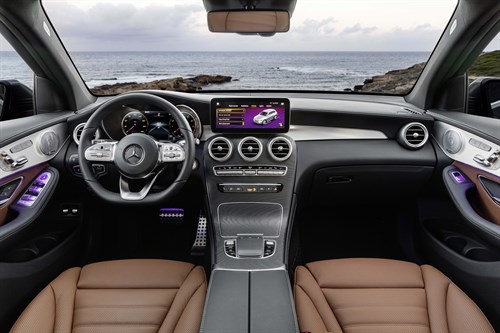 In place of the tried and tested Comand dial on the transmission tunnel Mercedes-Benz has added a touchpad, and there are additional input controls on the steering wheel too. Add 'Hey Mercedes' into the mix (that being Merc's voice command system) and there is barely a surface you can touch - or a word you can mutter - without the car doing something, often unintentionally.

Clever stuff or too much technological creep? We would lean towards the latter, the once unfussy simplicity of the GLC's cabin now dominated by a lot of functionality that you are unlikely to want or even use. If you do, then the touchpad on the centre console is a pretty hopeless means of controlling it all, it feeling like a significant step back from the old Comand dial featured in the previous GLC.

Ignore all that and the basics remain much as they did with the old GLC. It is a competent, if unremarkable, car to drive, which isn't so much a complaint as an actual compliment. We only sampled the higher-power diesel in this instance, but given that the old engine felt spritely enough with a bit less power, there is no reason to think the 194hp, 137g/km CO2 GLC 220d will feel overwhelmed. Refinement is good, the ride comfort is impressive (admittedly on the optional Air Body Control three-chamber air suspension), but if you are looking for engagement behind the wheel then you would be better served by one of BMW's alternatives. 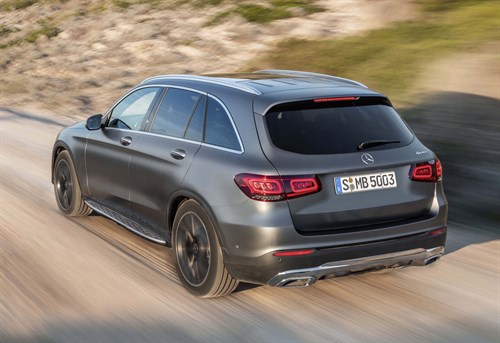 No need to mess around with the multitude of driver modes, then. Comfort does the best job, with other more sporting choices just ruining the ride and upsetting the nine-speed automatic transmission's otherwise sensible gear choices. A brief drive in the petrol 300, with its four-cylinder engine assisted by an electric motor, did little to convince us that it is worth waiting for, it lacking the low rev urgency of the diesel, and losing some smoothness in the transmission, too.

We took it off-road too - even though one of Mercedes-Benz's people said it is highly unlikely that any customer will - where the 4Matic proved its use in the muck. Good to know it can cope, then, should the office car park ever succumb to a landslide. If you don't require all the Utility part of the SUV mix, then it is also available as a 'coupe' or, more truthfully, a more rakishly sloped hatchback, which as well as losing a bit of boot capacity, increases its CO2 output compared with its SUV alternatives.

Exceptional the GLC is not, but in a class where conservatism is rife, that is hardly surprising. Even so, Mercedes-Benz's revisions to the GLC are certain to make sure it maintains its sales success - and might even build on them.