The updated V-Class is the go-to vehicle at the top of the executive transportation service industry. Are the latest upgrades sufficient to keep it in vogue?

n a world swamped by badge engineering and multiple sub-brands, Mercedes-Benz remains one of the few manufacturers confident enough to put its stamp on every one of its products.

Everything from articulated lorries and parcel delivery vans to luxury limos and even Formula 1 cars are all anointed with the iconic three-pointed-star.

Nowhere is the convergence between the commercial and luxury ends of the Mercedes empire more apparent than in the V-Class MPV.

Although the latest model is still based on the Vito van and comes in a variety of wheelbases, including standard, long and extra-long, the latest 2019 models gain more efficient powertrains, and a subtle facelift that includes reprofiled bumpers and swisher looking grilles.

Inside, the V-Class does its level best to disguise its humble panel van origins, employing a mixture of plush tailoring, soft-touch panels and deep carpeting throughout. Yes, the dash is looking a wee bit dated, smacking of previous-generation tech - especially when compared to the whizz-bang big screens and high levels of infotainment in the current E-Class - but in the main, everything still looks and feels pretty posh. 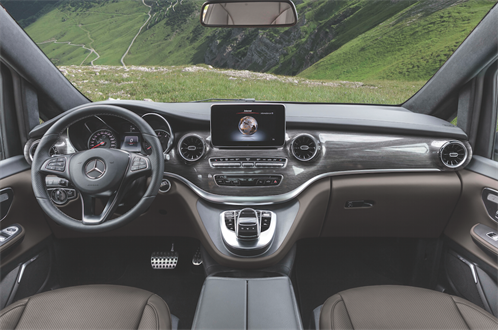 While the lofty driving position and expansive glass areas deliver a king-of-the-road view of the world, most everything is logically arranged and simple to operate, with the notable exception of some of the rather confusing infotainment menus.

On the customisation front, there is a wide choice of seating layouts to choose from.

While standard versions get seven seats, the longer models, which are a staple of the business user's airport run, come with room for eight and plenty of luggage space left over.

If you happen to be operating in the rarefied VIP end of the market though, you may want to plump for the Exclusive version. Favoured by countless celebs, it comes with luxuriously padded individual chairs featuring massage and reclining functions.

Although the seats can be slid back and forth, and removed if needed to transition to load-lugger mode, you should be aware that the seats are not exactly light, and once you have managed to crane them out you will need a fair-sized space to store them. 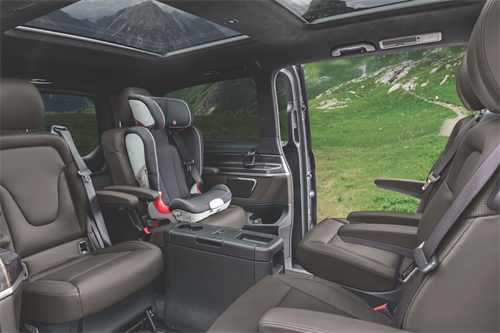 The latest diesel engines are effectively the same as those found in the C and E-Class ranges. So, they are the same 2.0-litre four-cylinder unit, with the 220d getting a basic single turbo application, while the more powerful 300d has its power boosted by an additional turbo.

Thankfully, both are considerably quieter and smoother than the clattery, antiquated 2.1-litre lump found in the previous model and both work well with Mercedes latest nine-speed gearbox.

Unless you are pushing the hauling envelope to the max you will be as well off with the cheaper, lower-powered version. It is eager enough, developing a healthy dollop of low-end torque, so it is simple to ease proceedings away from the mark, both smoothly and progressively, without the need for any unseemly over-revving.

Although some jitters can be felt emanating from the rear end of the cabin when driving solo, things do tend to settle down with a load on board. This is aided by Mercedes' multi-stage suspension dampers, which do a decent job of controlling the considerable mass and still manage to generate a relaxed, luxury- car-aping amount of vertical freedom. 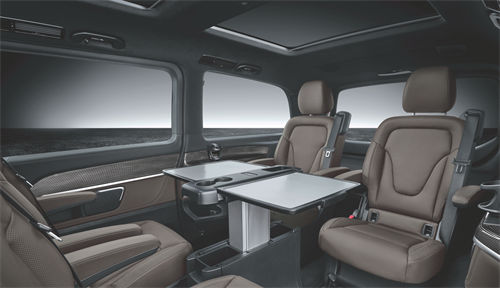 Obviously, if you have got clients on board you will want to avoid banging heads off side windows at all costs by adopting the line of least resistance. That said, although it's obviously no sports car, should you be running late for an appointment the V-Class will still allow you to press on a bit through bends without too many roly-poly antics, while the brakes are more than man enough to slow things up in sharpish fashion.

Although it is a pretty blunt-faced and slab-sided instrument, with similar levels of aerodynamic slipperiness as a building brick, the V-Class does manage to remain relatively impervious to side winds when travelling at brisk motorway speeds, and it also does a commendable job of isolating occupants from road and wind noise.

The new models go on sale this summer and although prices are yet to be confirmed, expect them to start just shy of £50k for a basic model, while pushing that invoice closer to £70k certainly won't be difficult.