Has MG stepped up the quality with its new HS SUV?

Moving into larger vehicles can be challenging for any manufacturer. Buyers demand something that looks and feels more premium - and with such a huge amount of choice in the medium SUV class, any new entry is going to have a bit of an uphill battle. Interesting, then, that Chinese-owned MG is being bullish yet again in declaring that its new HS SUV can compete with the likes of the popular Nissan Qashqai and Skoda Karoq, especially given that it benchmarked some similar models for its GS SUV previously. However, pretty awful ride quality, some cheap cabin materials, and below-average refinement suggested otherwise.

The HS delivers passenger space, MG's seven-year warranty and a purchase price designed to tempt most buyers away from the competition, while the interior design and quality are also a big improvement over previous MGs. This increased focus on quality has seen MG's latest models - the electric ZS EV in particular - showing huge promise; MG took around 2,000 orders in the first month. So does this new MG SUV have what it takes to become a credible rival for the Peugeot 3008 or the Kia Sportage?

Firstly, let's take a look at the size of the HS. Its dimensions are what you would expect from a car in this class. Legroom is generous, headroom is more than adequate, and while we didn't sit three people across the rear seats, the numbers suggest it will be one of the best in this area, too. At 450 litres, the boot is competitive. 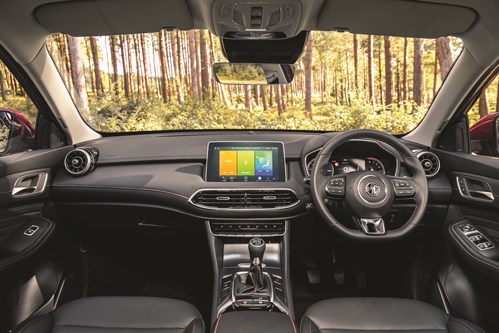 MG has made a point of using plenty of soft-touch materials inside the HS, making it the most upmarket interior the brand has produced under Chinese ownership. All cars get a 10.1in touchscreen as standard, and underneath you will find piano key-style switches and turbine-style air vents. The quality of all of the materials feels high, but the switches are only useful to a certain extent - if you click the temperature button, for example, you then need to move up to the touchscreen to control any settings, which almost defeats the point of having buttons. The rear seats can recline through two positions; rear passengers also get air vents, USB ports, and a fold-down armrest with storage and cup holders.

MG has chosen to keep it simple with the range, offering only three equipment levels. Starting from £17,995, entry-level Explore gets 17in alloys, Apple Carplay and Android Auto, keyless entry and start, Bluetooth, air-con, cruise control, faux leather upholstery and heated folding door mirrors. That compares well with most of its rivals, which all cost more than £20,000 for an equivalent model.

Then there's the mid-range Excite, which gets bigger 18in alloys, DAB radio, sat-nav, a reversing camera and automatic wipers, and costs from £20,495. Top spec Exclusive, from £22,995, gets you leather upholstery, heated electric sports-style front seats, two-zone climate control, LED headlights and a panoramic sunroof. If you go for the dual-clutch automatic gearbox (available on Excite and Exclusive for an additional £1,500), then traffic jam assist and adaptive cruise control are included, plus driving modes, metal pedals, and a powered tailgate on the Exclusive model. 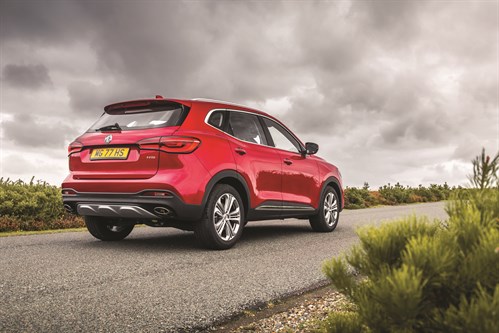 There is only one engine on offer - a 1.5- litre 160hp turbocharged petrol engine, which takes the car from 0-62mph in a reasonable 9.9 seconds, and up to a top speed of 118mph. Although the engine is rather quiet while on the go, its power delivery low in the rev range isn't great - with it only truly kicking in over 2,000rpm. We drove it paired with the six-speed manual, which MG says is going to account for the majority of sales. Opt for the manual and the 1.5-litre petrol returns WLTP combined fuel economy of 37.2mpg and emissions of 148g/km of CO2 - while the DCT option is 36.2mpg and 157g/km of CO2.

On the road, the HS doesn't feel too large, and while its steering is a little unresponsive, its lightness makes driving on tighter streets an easy task. All-around visibility is good too. Although body roll is kept to a minimum the suspension is quite hard, which was not helped by the 18in wheels we had on our test car.

While there is a lot to like - it is easy to be impressed with the improvement in the equipment and interior space, especially for a budget SUV in a strong and crowded crossover market - there are still some things that need to be addressed. The ride on the Exclusive model we drove is not up to scratch compared with its rivals. So, while the HS is a big step up for MG, it still has a long way to go.