In revising its lower-medium car, Mini has adopted a light touch. Should it have been more drastic?

The modern Mini Clubman debuted in 2007 as effectively an estate version of the Mini Hatch, albeit with twin boot doors (charming or irritating depending on how you feel about the join running down the rear windscreen) and a single rear passenger door.

Then, with the arrival of the second-generation model in 2015, Mini took it up a segment to become a lower-medium car, gaining a full complement of rear doors, but retaining the barn door boot arrangement. Now, it is time for a mid-life facelift, and while this is often a slight misnomer as manufacturers also take the chance to carry out mechanical revisions, in the Clubman's case it is very apt, as almost all the changes are cosmetic. 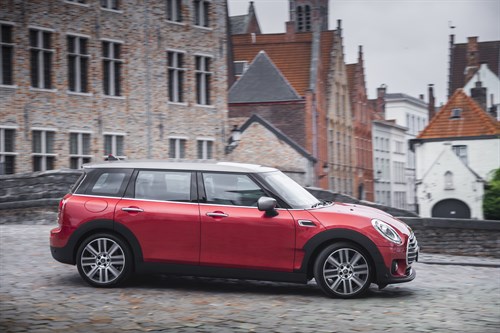 Many of the tweaks made to the Clubman see it adopt familiar features from the latest Mini Hatch. These include standard LED headlights, featuring 'halo ring' daytime running lights and indicators, as well as LED rear light clusters in the shape of Union Jacks, which are likely to divide opinion just as much as those on the Hatch did previously. Those in favour will also likely want to go for the new 'British spoke' two-tone alloy wheel design option, which again mimics the national flag. The front grille has also been made wider. Updated interior trims and new leather upholsteries are also available, while Amazon Alexa functionality has been added to the infotainment system - otherwise it is 'as you were' inside.

The facelift follows the range update the Clubman received last year, along with the rest of the Mini range, with the stated aim of making it simpler to understand (although it is still not the most straightforward price list out there). Buyers start by choosing from different model names, which each come with a different engine option - the Cooper, with a 136hp petrol; the Cooper D, with a 150hp diesel; and the Cooper S, with a 192hp petrol (a 306hp John Cooper Works hot hatch is also available).

On top of that there is then a choice of three equipment grades - Classic, Sport and Exclusive, with the latter two mostly introducing different styling and interior trim features designed to give a sporting or luxury feel respectively; we are testing a Cooper Exclusive here. The more basic City spec, introduced last year to target fleet buyers, turned out to be short-lived, having now disappeared from the range, along with the less powerful One and One D engines that powered it. 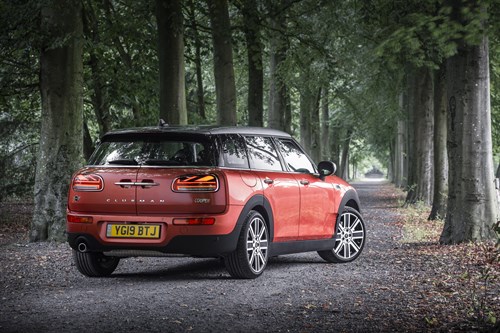 As we said, aside from an optional sports suspension not fitted to our test car, the new-look Clubman is unchanged mechanically, so the same is true of the driving experience. That means a composed ride that is closer to firm than soft, but not uncomfortable, and nimble handling, although there is a bit more wallow in corners than the feel of the suspension and meaty steering might lead you to expect. The 136hp petrol engine - brisk enough and with a good level of refinement - can be had with either a
six-speed manual gearbox or the seven-speed auto tested here. The latter is an impressive unit, shifting smoothly, and is expected to be slightly more popular with buyers.

While the interior layout is also unchanged, Mini fans are unlikely to be too disappointed by this. There is the trademark funky Mini look, with highly stylised retro touches such as the overlaid, steering column-mounted instruments and rows of aircraft-style switches. The quality level is high throughout, and there is Mini's round-screened version of parent company BMW's industry-leading iDrive infotainment system, although while Apple Carplay connectivity is standard there is still no Android Auto. The Clubman's square body shape also means plenty of front and rear headroom, although at 360 litres the boot is nothing special. 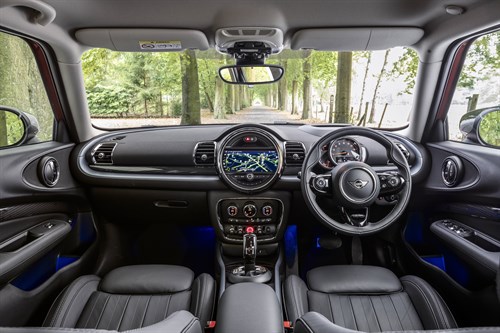 Compared with rivals, the Clubman also suffers from weak residual values - a whole 10% down on a comparable Mercedes-Benz A-Class, for instance, which combined with slightly worse fuel economy makes it more than 3p per mile costlier to run, despite being slightly cheaper to buy, although in the Clubman's favour it does sit a BIK band lower.

Ultimately though, the subtle nature of this facelift means the Clubman's offering remains much as it was - an unconventional choice that will appeal to drivers looking for something a bit different to the premium hatch norm, but falling just short of the level needed for wider success.