Peugeot designers deliver another striking motor, but do the 208's driving attributes measure up to the panache?

Peugeot's designers are on something of a roll, with cars such as the 508 SW and 5008 SUV garnering universal acclaim for their sophisticated styling and imaginative interior schemes. What constitutes beauty is always subjective, of course, but that doesn't stop us from heralding the new 208 as another absolute stunner from Peugeot. This is especially true of the GT Line cars.

Don't get carried away with any delusions that the GT Line is a spiritual successor to the legendary 205 GTi, however, as it is simply a high equipment grade - but it still impresses. 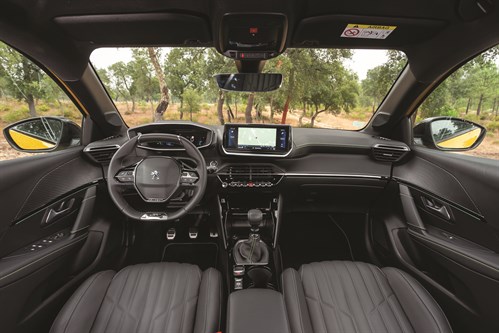 Of course, there is always the danger that an extravagant swoop of the designer's pen will cause no end of ergonomic issues and the 208 is certainly guilty of this. As with every 'i-cockpit' I have encountered, the 208's driving position is similarly compromised thanks to the elevated main instrument screen, which forces you to drive with the steering wheel almost resting on your lap.

Adopt a more natural position and the rim of the wheel sits slap-bang in your eye-line, making it virtually impossible to view the visual treats being played out in the instrument binnacle. Someone living with the 208 is bound to adapt, but it could be a hard sell luring someone away from another brand.

The 208's pinched roofline also impinges on interior space, as it forces occupants' heads rather too close to the top of the door frames. Chances are you will quickly gloss over this, but what will be more difficult to expunge from your psyche are the tight rear door apertures, which all but guarantee that getting ageing relatives or small children in and out of the rear seats will be a proper pain.

Although Peugeot claims every new 208 will essentially drive the same, this is clearly not the case. The sweetest version is the entry-level 1.2-litre, 75hp, three-cylinder-engined model, which rides smoothly, controls body movements confidently, and changes direction securely and predictably, thanks in no small part to its intuitive steering reactions. Unfortunately, this set-up is only available with basic Active grade, so you cannot get the GT Line highlights with it, and it also comes with traditional instrumentation rather than the 3D screen elements. The engine is also a bit of a sluggard and because you are compelled to work it hard to create anything approaching meaningful progress, it becomes very audible in the process - so much so, we suspect it may not be privy to the same levels of sound deadening as the more powerful variants. 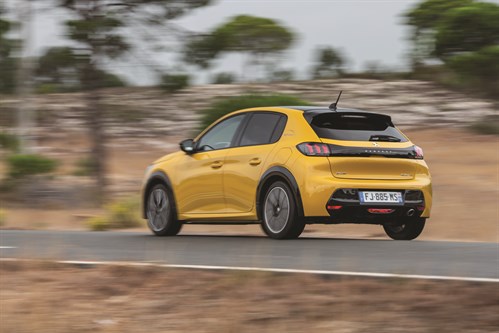 Moving up the ladder, the more potent 100hp three-cylinder engine's additional performance and significant tranquillity gains are impressive, but the ride and handling aren't nearly as well-resolved as the lower-powered car, especially when fitted with larger 17in wheels. It is almost as if Peugeot has over-compensated for the larger wheel sizes, engineering-in softer suspension settings that introduce an increase in vertical body movements and produce rather laboured cornering reactions. Worst of all, the speed-sensitive steering loads and unloads its weight far too crudely, both with changes of speed and degrees of turn.

There is also an even more powerful 130hp three-cylinder engine attached to an eight-speed automatic gearbox. Given that superminis have traditionally endured some pretty sketchy automatics, the unit fitted to the 208 is nothing short of revolutionary. Providing silky driveability and near-seamless changes - with just the occasional gentle shudder on some downshifts as speeds recede towards a halt - it is a proper gem of a transmission.

For those looking to maximise economy there is also a 100hp 1.5-litre diesel engine. In some respects, it is an incredibly refined engine. Unfortunately, this is nullified by significant levels of boom, and vibrations that can be felt and heard transitioning through the floor, the pedals and the gearshift lever. Just as well Peugeot reckons it will be a marginal seller at best.