Peugeot goes all out to broaden the appeal of its all-new 208 with an electric vehicle (EV) version. Is this the model all future EVs will follow?

Nearly every manufacturer on the planet is committed to some form of electrification programme, but one quandary confronting them all is whether to build stand-alone models or adapt mainstream products to accept the technology.

Peugeot has certainly grasped the nettle and may have stolen a significant march on its rivals by creating an innovative multipurpose platform for its all-new 208 supermini.

Effectively, the platform has been designed to allow full electrification powertrains to sit alongside traditional petrol, diesel and hybrid power sources on the same production line.

This designed-from-scratch approach also means batteries can be located evenly under the floor rather than behind the rear seats to help achieve a balanced weight distribution and ensure interior space isn't compromised. Obvious evidence of this is the E-208's boot capacity, which at 311 litres is identical to the rest of the 208 line-up.

The E-208 comes with a strident 50kWh battery linked to a single-speed electric motor that develops 136hp and 260Nm of torque. That is a good deal more bottom-end shove than the 208's similarly powerful 130hp turbo-petrol engine or the torque-rich 1.5 diesel unit. Perhaps the most impressive aspect of the electric car's performance - as is the case with all EVs - is that it delivers its driving forces the instant you breathe on the
accelerator pedal.

In practice, this means swifter 0-30mph responses than many a petrol-powered hot hatch, and if you sustain determined pedal pressure you will sprint past 62mph in just 8.1 seconds.

The likelihood is, most people will want to play eco-warrior rather than traffic light terrorist, so there are three different response settings, including an Eco mode that reduces accelerator responses and dials back the air conditioning to help optimise range potential.

There are also two braking modes. The more aggressive of the two encourages one-pedal driving by using the electric motor's inherent braking qualities to reduce speed, therefore reducing the need to always employ the brake pedal.

Sadly, the brake pedal itself is pretty unresponsive and lacks definition, which seems to be an issue that blights almost every car that uses regenerative braking as a source of battery-boosting recuperation.

The E-208 isn't the most refined car, either. As well as a healthy amount of motor whine, the lack of traditional combustion noise only serves to highlight road and wind clatter. The ride also feels quite unsettled, although Peugeot managed to find some of the worst road surfaces in Portugal for our test drive, so it would be disingenuous to be too critical until we have driven the car in the UK.

With a purchase price of £29,650 after the government's £3,500 plug-in car grant - BIK calculations are based on the full £33,095 P11D price - Peugeot is not exactly giving the electric 208 away, but it does come with plenty of standard equipment thanks to its top-end GT specification.

Ergonomic flaws aside, including the fact that many will struggle to attain a comfortable driving position and still see the instrumentation, along with somewhat restricted entry to the rear seats, the cabin is nothing short of spectacular. 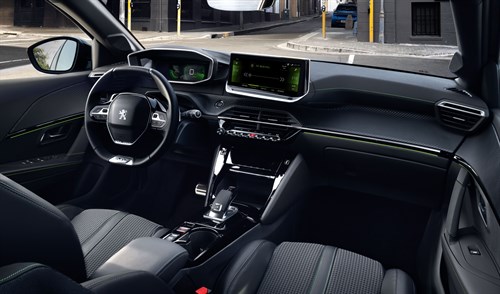 Peugeot's latest i cockpit dashboard, featuring 3D inspired instrumentation, is complemented by an enormous 10in central touchscreen, while banks of elegant piano-key-inspired switches, and a mixture of soft-touch materials and authentic-looking carbon dash panels, deliver a classy look and feel.

If we are to believe Peugeot - and there is evidence to support this - an average daily commute in a typical supermini is less than 20 miles, so the claimed WLTP range of 211 miles means most folks will only need to charge their battery once a week. Although the E-208 can be juiced from a domestic three-pin plug it, will take more than 20 hours to do so, whereas a bespoke wall-mounted home charger will deliver a full charge in around eight. If your journeys are more extensive, then rapid recharging at a motorway fast charger will give you an 80% top-up in around 30 minutes.

The battery is also fluid-cooled to help protect its longevity by sustaining a steady temperature, and is guaranteed to retain at least 70% of it charge for eight years or 100,000 miles. Come disposal time a certificate of battery condition can be obtained from a Peugeot dealer as part of a scheme to help protect residual values.