Does the second-generation urban SUV have what it takes to repeat the success of the first?

This is the new Range Rover Evoque - though at first glance, you might not have realised. While Jaguar Land Rover would doubtless call attention to many exterior changes compared with the old car - in fact it says all that is carried over is the door hinges - its designers could be excused for not wanting to tinker too much with the recipe from the first-generation model, which became the fastest-selling Land Rover in history when it launched in 2011. That means the new one has a lot to live up to, and combined with JLR's well-publicised current business issues, it is hard to overemphasise how important it is.

Get under the skin and it is probably fair to say the main technical innovation with the new Evoque isn't actually here yet. That will come around the end of this year, when a plug-in hybrid arrives that JLR hopes will be a gamechanger in terms of its standing in the fleet market. That said, the launch car isn't totally sans-electric, as aside from the entry-level diesel option, all the other powertrains come as standard with a 48V mild-hybrid system. This can't power the car on its own, but what it can do is help fill in torque gaps when accelerating, as well as deploy the car's stop-start system while it is still moving - activating below around 11mph. On the move this all operates smoothly and unobtrusively, but JLR claims it delivers an 8g/km CO2 reduction and up to 6% improvement in fuel economy. 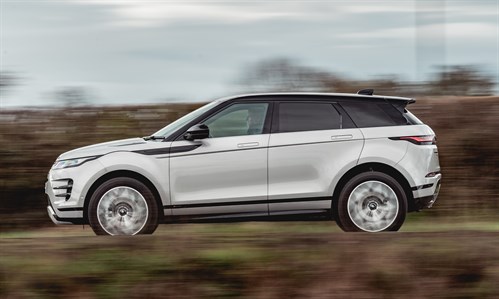 In the car tested here the system is paired with a 180hp diesel engine - the middle of three diesel options available. On paper this should offer plenty of grunt to move the Evoque around, and once up and cruising this is certainly the case. However, it is paired with a nine-speed automatic gearbox that can be frustratingly slow to respond when pulling away at junctions or accelerating out of bends.

The steering isn't great either - it is vague, and yet gets quite weighty around straight-ahead, which is a bit disconcerting.

The Evoque works well as a cruiser. The ride is nicely composed - not overly soft but well damped, offering a good level of control and comfort, even on the optional 20in wheels fitted to our test car. It is nicely refined as well - the engine, while a bit noisy on acceleration, is quiet at motorway speeds, and road and wind noise intrusion is also minimal.

In truth, the Evoque is a nice place to sit whatever the road conditions. Even on the S equipment grade tested here - only one up from the base model - it is nicely trimmed to the touch, with high-quality materials used on the doors and dashboard, although there are some cheaper plastics lower down and the centre console lid makes a bit of a tinny sound on closing. On the plus side, the raised nature of the latter feature means the driver feels nicely cocooned in typical Range Rover style. 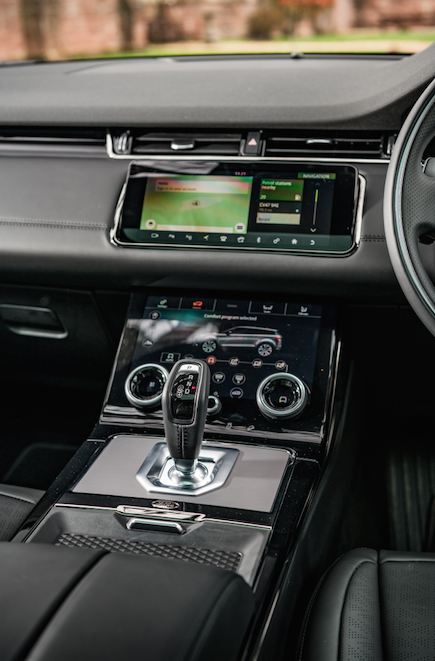 A major interior feature is the Touch Pro Duo infotainment set-up, which is new to the Evoque, having made its debut with last year's Velar. A cost option with S grade, this sees a pair of touchscreens arranged vertically on the dashboard, with the lower unit handling functions such as the drive modes and climate settings (a single screen is standard). In a neat arrangement, physical climate control dials are integrated within the lower screen, making them easy to adjust as well as providing an aesthetic flourish. While the rest of the functions rely on touchscreen operation, a high level of responsiveness makes them easier to use on the move compared with other such units. In a major gain from the old Evoque, Apple Carplay and Android Auto connectivity are now standard from S grade up.

The rear seats offer a decent amount of room and get a reasonable amount of light, despite how small the back windows look from the outside, while the boot is around 10% bigger than the previous Evoque's.

While the Evoque is Land Rover's most city-focused vehicle, it is still a proper 4x4, capable of tackling seriously tricky terrain without difficulty. Taking on an off-road course reveals that its capabilities exceed by far what 99% of drivers will dare to attempt, thanks to features like Land Rover's Terrain Response 2 driving mode selection system and hill descent control. It can even wade through water up to 60cm deep if necessary. Altogether, this off-road ability is an extra feature the Evoque offers over more road-focused rivals, though how relevant it will be to most drivers is debateable. 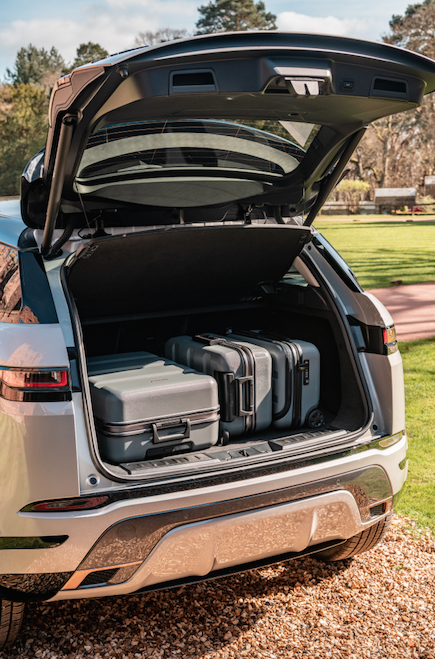 One more universal thing the Evoque has in its favour is highly robust residual values, particularly for the spec tested here, which at 52.3% is the best in the range (apart from front-wheel drive versions). The figure is so strong that it is cheaper than its rivals on a cost-per-mile basis, despite relatively high fuel consumption. However, a combination of greater CO2 emissions and a higher purchase price do result in higher BIK tax bills, meaning drivers may find the cost sheet less impressive than managers.