We caught up with the diesel version of the latest Renault Kadjar. Is it a better bet than the new petrol we reported on last year?

When we reported on the revised Kadjar at the end of last year, we talked a lot about the new 1.3-litre turbocharged petrol engine, with outputs of 140hp and 160hp.

This engine will be significant, and not just because of its application in the Kadjar and other Renault models. It will also be used on Nissans and Mercedes-Benzes - in fact, the new Mercedes-Benz CLA we featured last month also uses it.

But for SUVs, a petrol engine is still a left field choice for many company car drivers, especially anyone who covers any significant mileage.

We think if anyone has changed a diesel SUV to a petrol equivalent when their car has come to the end of its fleet term, plenty of those will be keen to get back into a diesel when they see how much extra they are spending in fuel on their private mileage.

So it was good to catch up with the Kadjar fitted with the engine we are certain will feature on more fleets than the petrols - the 115hp 1.5 Blue dCi.

The Blue dCi label for this engine is to signify that Adblue is required to meet the latest emissions regulations, and for now it is the only diesel version of the revised Kadjar on the roads. 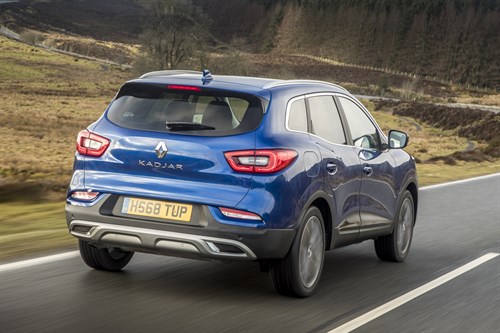 It will be joined soon by a new 1.7-litre diesel producing 150hp, but while this 115hp 1.5-litre should be more than adequate for most company car drivers, we will also be keen to try the new engine when it arrives - and it is the only diesel you can choose with a four-wheel drive option.

When accelerating, the 1.5 Blue dCi feels a little livelier than the 11.7-second official 0-62mph time suggests, while the engine note is never intrusive until higher up the rev range (where no one should really need to go in a diesel).

While it looks the part on the outside, with bold curves in its styling, the interior is a little plain-looking. There is relatively little dashboard clutter on our test car, with the majority of functions housed within the R-Link touchscreen interface, but while mostly simple and clear, it doesn't feel special like some rival cars including the Peugeot 3008, or have the charm of the Citroën C5 Aircross.

Our S Edition test car came with colour-coordinated blue stitching in the upholstery, reflecting its bright metallic paint colour, but there is little else to stimulate the senses.

Of course, storage space is good in the cabin and the Kadjar would easily cope with day-to-day life for a family. It is generally user-friendly, with light controls making it easy to drive around town.

Our time with the Kadjar was spent mostly on long motorway trips, when the car seemed capable of achieving more than 50mpg regularly and with ease.

The Kadjar is a comfortable family car that does everything you would expect of it very well, with the latest updates keeping it fresh in the fiercely competitive SUV sector - and we would recommend the diesel over the petrol as a company car in a heartbeat.