Can a small SUV really be sporty? Seat thinks so.

That's clearly what Seat thinks, which is why it offers the FR equipment grade seen here with its Arona range. As well as a more powerful engine option it gets exterior styling tweaks to the rear bumpers and front grille, along with dark tinted windows, while inside there is a racier trim and sports seats. So, might it be a winner for a go-ahead company car driver with a young family to transport?

OK, you might question whether a more high-riding SUV could ever hope to compete with a hot hatch for driving thrills, but while the answer in this case at least is 'no', the Arona FR does impress on the road. The 150hp put out by the 1.5-litre engine tested here is more of a warm hatch figure these days, but in a car this size it is still enough to whizz you along very nicely. It feels nippy around town, has enough grunt for relaxed motorway use, and is plenty responsive enough to enjoy on a back road, especially when the throttle response is sharpened up with the selectable drive modes on offer. 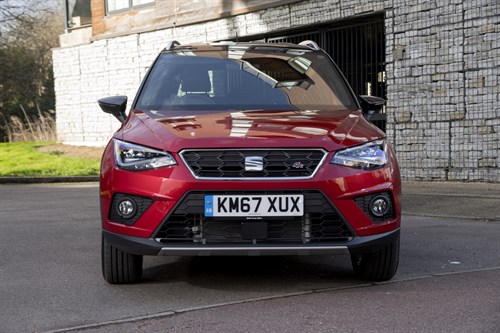 The latter environment is where enthusiastic drivers can also enjoy a chassis that feels agile and eager to corner, with body roll well controlled, while even the steering - also adjustable through the drive mode control - is precise and not without feel. All that lets the side down here is the six-speed manual gearbox, which could be a bit slicker. The ride feels on the firm side around town, but is nicely composed at speed, and while we have previously questioned the former in a regular Arona, it makes more sense in a sportier variant like this. The urban driving experience is further helped by good
all-round visibility, and rear parking sensors to assist with manoeuvring.

Aside from the sporty cosmetic changes, the Arona FR's interior is familiar from the rest of the range. The 8in touchscreen, which is standard at this grade, is highly responsive, with a neat gesture detection feature that pops up with icons when a finger approaches. FRs also get dual-zone climate control as standard. 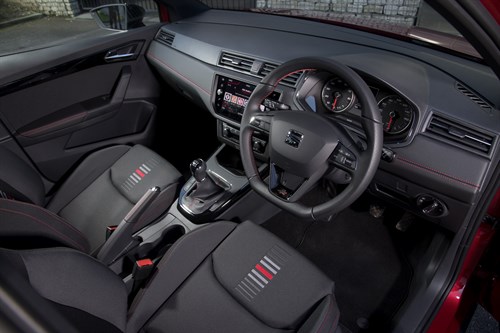 On the minus side, some of the interior feels a touch lacking in quality - the handbrake in particular feels quite flimsy, and away from the main touch points there are some scratchy plastics present. Also, while the sports seats offer good lateral support, they could do with being a touch firmer in the middle.

Rear legroom is reasonable, and there is lots of headroom back there, while the 400-litre boot is a good size for the segment.

So, the question left to answer now is whether a driver who likes the sound of a faster SUV is about to have their fleet manager rush in to stop them due to the prospect of a high-powered engine guzzling petrol, especially since the FR is also available with the 1.0-litre 115hp unit (the most popular in the range) and a 1.6-litre diesel. 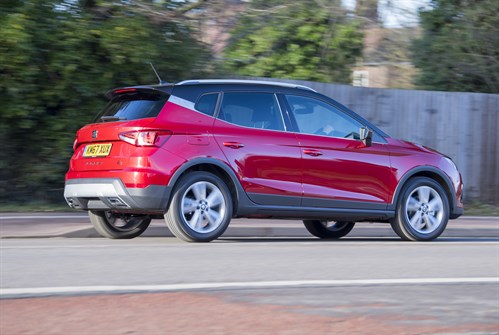 Well in fact, it could almost be the opposite. Remarkably, the official combined fuel economy of the 150hp FR is actually 1.1mpg better than the smaller petrol. And from the driver's point of view, CO2 emissions are also slightly better, although a P11D nearly £1,500 higher means increased tax, as it sits in the same BIK band. That increased price combined with slightly weaker residuals also contributes to a cost-per-mile deficit of nearly 2p. But even so, if what you really want is sporty SUV motoring, then the financial case against it is nowhere near as stark as you might have thought.