The Tarraco has lots in common with other Volkswagen Group SUVs. Does it have enough appeal to set it apart?

Until now, if you fancied a seven-seater Seat, your choice was limited to the Alhambra MPV, but with the advent of a third SUV in the line-up in a very short period, the choice of seven-seaters has increased by 100%.

Welcome to the Tarraco, which, as the largest SUV in the Seat family, sits above the compact Ateca and small Arona, and is closely related to the Skoda Kodiaq and Volkswagen Tiguan Allspace. While outwardly similar, it feels sportier and firmer, sitting 20mm lower than its not-so-distant cousins. More on how it drives later.

While the roofline and sharp crease through the doors are similar to that of the Skoda Kodiaq, the overall design is far more purposeful than that of the Arona and Ateca. There is a more prominent, upright grille and full LED headlights that retain Seat's triangular signature, but they are now set further into the body, giving a more focused appearance. 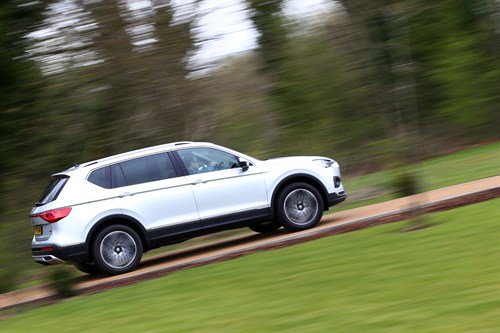 The Tarraco should also knock its group counterparts, as well as rivals from other brands, out of the park in terms of driver appeal, given Seat's image and ethos.

With a large boot and a generous level of equipment, the Tarraco would appear to meet the demands of a growing family, something Seat felt it needed to do given the success of its two smaller SUVs. But the third row of seats that we tested on the launch, - while standard across the range - are best reserved for occasional use. Even as a short adult, I found it quite claustrophobic in the back and legroom was very limited. Alternatively, you can fold them out of the way entirely to free up a useful 700-litre boot.

In addition to its substantial appearance, the Tarraco is also substantially priced. The version we tried at the launch was close to £40,000. So what else do you get for your money other than two extra seats and a few funky design cues? 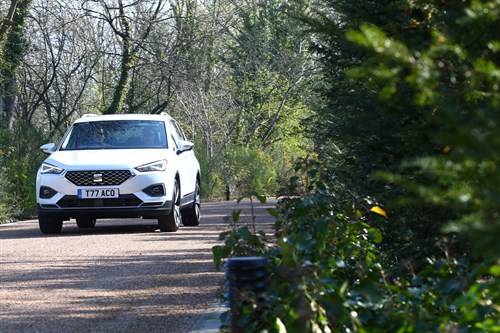 Under the surface, there is little to separate the Tarraco from the Kodiaq. There is a choice of a turbocharged 1.5-litre petrol (this wasn't available to drive at the launch) and a 2.0-litre petrol, which will suit those who don't expect to cover a very high annual mileage, as well as two 2.0-litre diesel engines. We compared the petrol and diesel engines, and found the 2.0-litre 190hp petrol was more responsive from the start line than the same-sized diesel with 190hp, which proved strangely laggy for the first few seconds from stationary until the turbo charger spooled up.

Like its Seat siblings, the Tarraco seems to shrink as you drive it. It feels a little sharper and more responsive from behind the wheel than the Skoda, thanks in part to that 20mm lower suspension, which results in a lower centre of gravity.

The smaller petrol model's ride on 17in alloys might well be an improvement over the top Xcellence models' offering of wheels up to 21in in diameter that, while looking great on the car, very much sacrificed ride comfort and resulted in rather unsympathetic treatment of
road bumps.

Inside, the Tarraco is pleasingly designed and seems well equipped. There are two main trim levels, SE and Xcellence, each enhanced by a comprehensive array of equipment packs. Even the most basic Tarraco is quite well equipped and the top models look very decent value against the ever-growing pack of contenders.

The dashboard has a more sophisticated look than previous Seat designs, with a free-standing 8in infotainment screen that looks nice and modern, and is easy to reach when you're on the move, as well as quite easy to navigate around.

As a versatile family SUV, the Tarraco ticks most of the boxes, and if it is a large SUV you are after, it would certainly be a good choice.

However, distinctive looks and practicality aside, it is a late arrival, with many seven-seat alternatives available, including the Nissan X-Trail, Hyundai Santa Fe and, of course, the Skoda Kodiaq.