No manufacturer gives you more metal for your money than Skoda and the Scala continues that trend, offering family sized motoring for supermini cash.

For some people it is still hard to shake off the image of Skoda as the Lidl of the motoring world, offering no-nonsense family transport at budget prices.

However, if you consider the giant strides made by recent additions to the line-up - including the Octavia family car, Superb saloon, and the Karoq and Kodiaq SUVs - then you get a sense there is a concerted effort afoot to ditch the 'basics' tag in favour of something more alluring.

The Scala is effectively a replacement for the unloved Rapid and is another new Skoda attempting to bang home this message.

Scanning the Scala from front-to-back and top-to-toe, it is clear that any vestiges of quirky Eastern Bloc architecture have been banished forever. Instead, a neatly proportioned grille, searing LED lighting and pencil sharp swage lines combine to suggest more than a faint whiff of Audi A3. 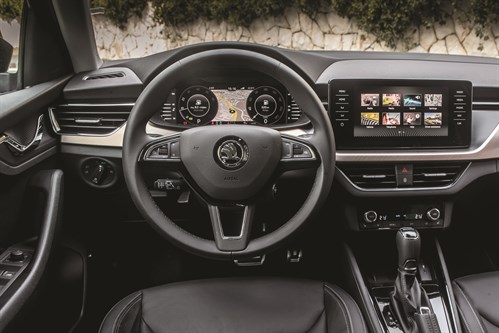 It is a similar story inside. Sure, start prodding around and delving into the darkest recesses of the cabin and you will still bump into some rather industrial plastics and trim, but these are successfully offset by a smart, coherent interior design treatment, augmented by plenty of classy touchy-feely bits. Quality fixtures include smartly tailored supportive seats, a neat, tactile steering wheel, soft textured door armrests and a pin-sharp VW group touchscreen.

With the exception of a prominent hard point on the centre console (which has an annoying habit of rubbing away at your outer kneecap), the Scala also provides a wide range of steering wheel and seating adjustments, and a large outboard footrest, encouraging an optimum spine-in-line driving position.

Given the Scala is based on the same platform as the VW Polo, the interior and boot space is nothing short of staggering. You will easily get a six-foot passenger sitting behind a similarly sized driver, so there is not the slightest risk of any toddlers playing footsie with the back of your seat. Equally, rear headroom is expansive enough to rule out any interaction with the effusive locks of even the gangliest teenager. 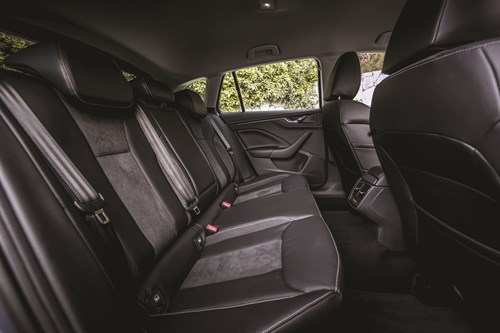 At 467 litres - 126 more than a Ford Focus - the boot is similarly cavernous, with a low load lip and square sides, meaning it is more than capable of swallowing the bedrock ingredients of a car boot stall.

Sadly, the driving aspects of the Scala are less impressive.

The 115hp 1.0-litre three-cylinder petrol engine (which is likely to be the bestseller)is evidently thrummy from the moment you key it into life, and although it is strong and flexible enough to get the Scala scooting along at a respectable rate, it does transmit a fair bit of vibration through the floor as it climbs up through the rev range.

If anything, the 1.6-litre diesel engine is even louder and it also generates more than its fair share of gruff vibrations when revved. Worst of all, it is annoyingly snatchy at low revs when driving in heavy traffic, giving you a sense that the engine is rocking on its mounts as you get on, or come off, the accelerator pedal. At 108g/km, its CO2 emissions aren't particularly impressive either.

The Scala's ride and handling compromise is also rather disappointing, especially given that the cars we drove were fitted with optional lowered sports suspension with adaptive dampers, giving Skoda's engineers the opportunity to really fine tune matters. 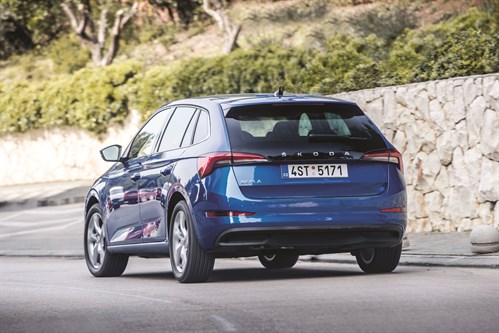 In essence, the rear suspension feels overly restricted, causing a tight, unsettled sensation, and it simultaneously broadcasts a significant acoustic thud over relatively minor lumps and bumps. At the other end of proceedings, the front suspension is almost too free, with a rather floaty, uncontrolled quality that is very much at odds with the actions going on at the stern.

Placing the Scala on the road is also less than satisfactory. With a couple of selectable settings, the default level of assistance for the steering is wispy light and feels rather disconnected around the straight-ahead position. Punch the button to action the heavier sports setting and although it adds some much-needed heft, it also ushers in greater levels of friction, leading to a loss of steering sensation.

Not that you are ever likely to lose the sensation that you are getting an enormous amount of motoring for your money. P11Ds for the Scala kick off at around £16,500 and all models come with alloy wheels, air conditioning, LED headlights, front and rear electric windows, and plenty of essential safety kit.