This is the Skoda Scala - the Czech brand's all-new lower-medium car. Which might come as a surprise, since it already has such a vehicle, the Octavia, which in fact is its biggest fleet seller, particularly in estate form. However, Skoda says that the larger size of the Octavia hatch compared with rivals pushes up the purchase price, meaning there is room for a model offering more traditional hatch dimensions at a lower upfront cost, which it claims will appeal in particular to job-need fleets that make up a large proportion of its customer base. The same also applies to diesel engines, which is why the fleet fuel split is expected to be 50-50, despite the fact that just 10% of the Scalas sold in the UK are expected to be powered by the demonised fuel, owing to market trends in the segment. This means the single diesel option in the range is well worth examining as we sample the model in the UK for the first time.

It is a 1.6-litre, 115hp unit available with either a six-speed manual gearbox, or the seven-speed DSG automatic tested here. It is a well-matched pairing, as the auto gearbox shifts smoothly and without hesitation - you don't notice it operating most of the time, which has to be a good sign. The engine itself can be a bit noisy, but it is punchier than you might expect, offering a nice torquey surge when necessary. 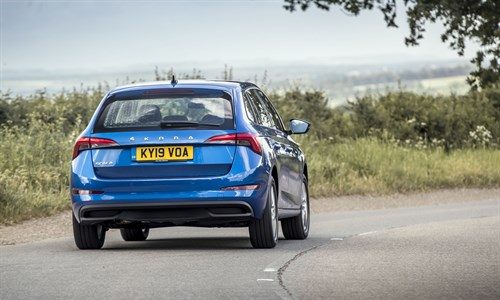 As for the rest of the driving experience, it can't match rivals such as the Ford Focus dynamically thanks to a bit of lean in the corners and steering that is on the vague side, but the system's lightness is a bonus around town, and there is an impressively comfortable ride, meaning the motorway-based drivers who will be drawn to the diesel in particular are likely to be happy.

As noted earlier, the Scala has smaller exterior dimensions than the Octavia, but that doesn't make the new model pokey inside. Far from it, in fact - there is plenty of both leg and headroom for rear seat passengers, while the 467-litre capacity boot is one of the largest in the segment. 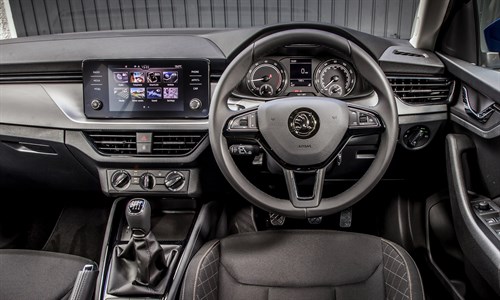 As for interior design, there are some neat aesthetic touches, such as door handles in neat recesses by the air vents, but a significant amount of hard and scratchy plastics on the mid-range SE equipment grade tested here show Skoda's budget-brand roots. However, the switchgear feels of good quality and generally robust.

A particular highlight is the infotainment set-up - both the 8in Bolero touchscreen we tried and the 9.25in Amundsen unit that comes with the range-topping SE L are from the new third generation of VW Group systems, which the Scala is the first car to benefit from. The results are highly impressive, with a system that is incredibly slick, highly responsive to touches and has very sharp graphics. SE cars don't get sat-nav, but there is Apple Carplay and Android Auto connectivity.

As you would expect, opting for the diesel Scala means better fuel economy than the equivalent petrol model. However, while the diesel emits less CO2, the 4% BIK diesel surcharge means it will cost more to tax. 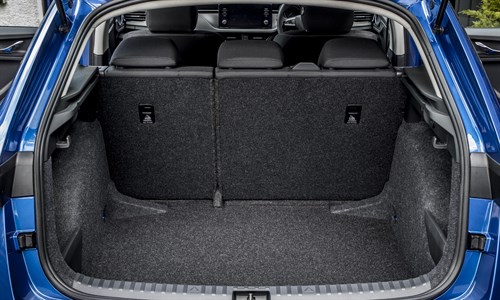 Whichever Scala you choose, though, there is no denying its upfront value, with the P11D of the mid-range SE tested here cheaper than an equivalent entry-level Focus. This low price, combined with impressive comfort, space and technology, makes the Scala an appealing choice - but whether or not the diesel engine is right for your fleet will probably come down to where your fiscal priorities lie.