Does the new equipment-level Swift offered by Suzuki have a good enough attitude to make it a viable fleet choice?

The Attitude special edition has been a staple of the Suzuki Swift range over the years, having been introduced some time during the life cycle of the car to refresh its appeal.

You would think it was a missed opportunity by Vauxhall when it produced the Cavalier not to apply this name to one of its many limited-run models, but Suzuki seems to have made it work with the likeable Swift.

The new car appears similar to the mainstream versions of the Swift, but look a bit closer and you will spot the differences. It is not just the faux carbon fibre sticker on the rear; with this equipment level you get a carbon fibre-like trim, 16in alloys, a sporty front grille, front fog lights as standard, and a roof spoiler to boot. 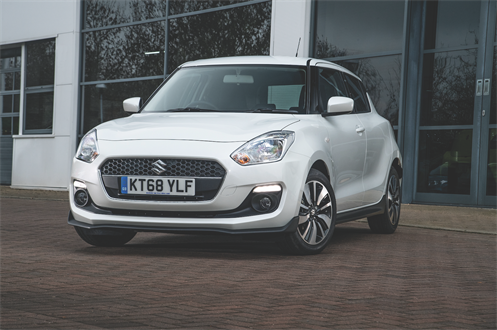 So it is an appealing step between the standard versions and the hot Swift Sport. While you don't get the popular 1.0-litre Boosterjet engine seen in the normal Swift in this car, what is offered under the bonnet of the Attitude is a 1.2-litre naturally aspirated petrol engine that kicks out 90hp with 120Nm of torque. While you might think that is not very powerful, the whole point of this car is to offer those sporty looks with lower running costs - good for those business insurance premiums. On a combined run this engine is fairly frugal, claiming 51.4mpg, and CO2 emissions are 124g/km. It might well perform better in real-world driving than small turbo alternatives. 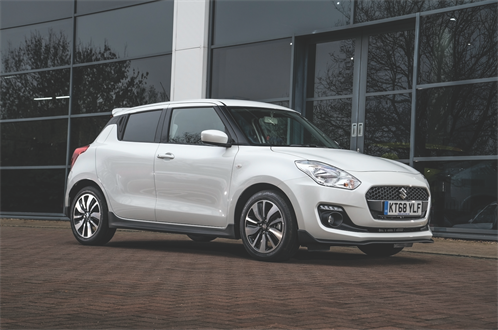 But that is not to say the Attitude isn't good fun. Despite the sporty exterior, the suspension is quite supple and we were pleasantly surprised by the ride comfort, even with the 16in Attitude alloys. You will feel bumps and imperfections in the road, but the car is good at shrugging them off. Refinement is good too, and during gentle cruises or travelling at motorway speeds the cabin is a pretty quiet place to be. The five-speed manual gearbox shifts snappily, and the steering offers a good compromise of being light for low-speed manoeuvres, with decent feedback in high-speed corners.

As the Attitude grade is based on the mid-range SZ-T, it offers some quite useful equipment as standard including the 7in touchscreen, DAB radio, sat-nav, smartphone connectivity, air-con and a leather steering wheel - not bad for a starting price of £14,599.

Residual values for the new Swift are very good indeed, with this particular model retaining 32.8% of its value after three years and 60,000 miles. That is better than the comparable C3 and Fabia. But it's worth noting that Ford and Vauxhall have deeper pockets when it comes to fleet deals. 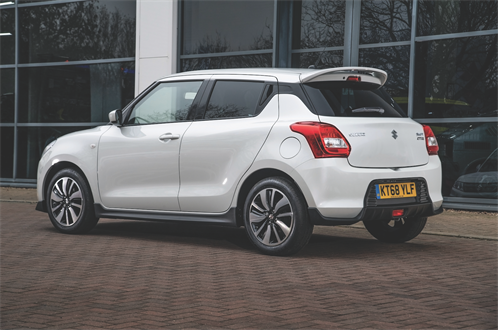 At 265 litres, boot space is bigger than the previous-generation Swift, but smaller than the Fiesta and Corsa. Room in the back of the car is a bit tight but Suzuki would point to the slightly more practical Baleno as a more spacious small car alternative.

The Swift has always been a car perhaps better-suited to small business users with good local Suzuki dealers rather than big fleet deals, but its value-for-money credentials, fun-to-drive nature and likeable styling have appeal. That is the same for this Attitude's equipment level, which gains a range of styling upgrades inspired by the range-topping hatch, while remaining true to the Swift's low-running cost USP.

Reaching 60mph in just over 11 seconds, the Swift Attitude is not really built for speed or power, despite looking pretty sporty. But we think a sporty car without the sporty running costs could make people at this level on the company car ladder feel rather happier than a typical economy model.