The trend of downsizing to small, turbocharged petrol engines has been widespread in the quest to produce tax-efficient models that run on unleaded.

In many small cars, their benefits have eliminated the need to offer more expensive diesel variants, but when it replaces a diesel engine in an SUV, it is likely to raise an eyebrow or two.

Suzuki never produced its own diesel engines and has a history of partnerships with other suppliers, including PSA, Renault and Fiat, for its European models. But now its entire range is diesel-free - and that includes the latest version of the Vitara.

It was always going to be a bit of a struggle to claim that the sprightly turbocharged 1.4-litre Boosterjet petrol engine was an alternative to diesel, and especially the normally aspirated 1.6-litre petrol engine, which lacked both the torque and the fuel economy.

However, for the 2019 model year, Suzuki has replaced the 1.6-litre engine with the 1.0-litre Boosterjet. Despite being smaller than the 1.6-litre unit it replaced, a turbocharger makes it more responsive, as well as more frugal, at least on paper.

These changes come with other updates for the Vitara, including a redesigned radiator grille and lower bumper, while the rear lamps now incorporate a new LED display.

Inside, a new seat trim design is used on the whole range, while suede seat fabric is fitted on SZ5 models. The dashboard top is upgraded to a soft touch material and the instrument cluster now features a central colour information display. 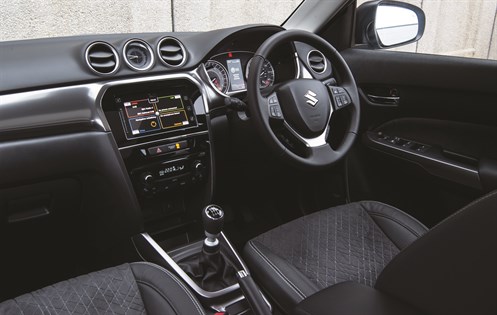 For customers choosing the SZ-T model, it has, over and above the equipment listed in the specification panel, 17in painted alloy wheels, rear privacy glass, white stitching for the seat trim fabric, and a Smartphone link audio and navigation system.

The 1.0-litre engine, new to the Vitara in 2019, was already available in Baleno, S-Cross and Swift models. It produces 111hp, with 125lb-ft of torque available between 2,000 and 3,500rpm when equipped with the standard five-speed manual transmission.

Torque is limited to 118lb-ft for the optional six-speed automatic transmission, but the top end comes in a little lower down the rev range at 1,800rpm, and lasts until 4,000rpm.

The 140hp 1.4-litre Boosterjet engine has been available on the S equipment grade Vitara since 2016. For 2019, the S has been discontinued, with the 1.4 litre offered in SZ-T and SZ5 derivatives. 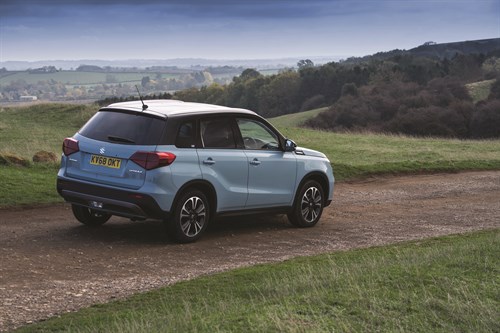 The version with perhaps the most to offer company car users is the 1.0 Boosterjet SZ-T with two-wheel drive (focused on in our specification panel).

The Vitara is quite a light car, tipping the scales at 1,160kg - a fraction less than a Ford Fiesta 1.0T Ecoboost Titanium - so it ought to be generally as fuel efficient as any other small car around town.

The controls are light and easy to use, and the elevated driving position offers a better view than traditional small hatchbacks - many of which would be in this price bracket.

It is possible that the chunkier shape of the Vitara compared with a small hatchback could mean it is a bit thirstier during sustained high-speed driving.

The Vitara is a pleasant and likeable entry-level SUV, and with the 1.0 Boosterjet engine it is an affordable alternative to a traditional small hatchback for fleets that are keen on employee retention and need to have models on their choice lists that stand out a little.